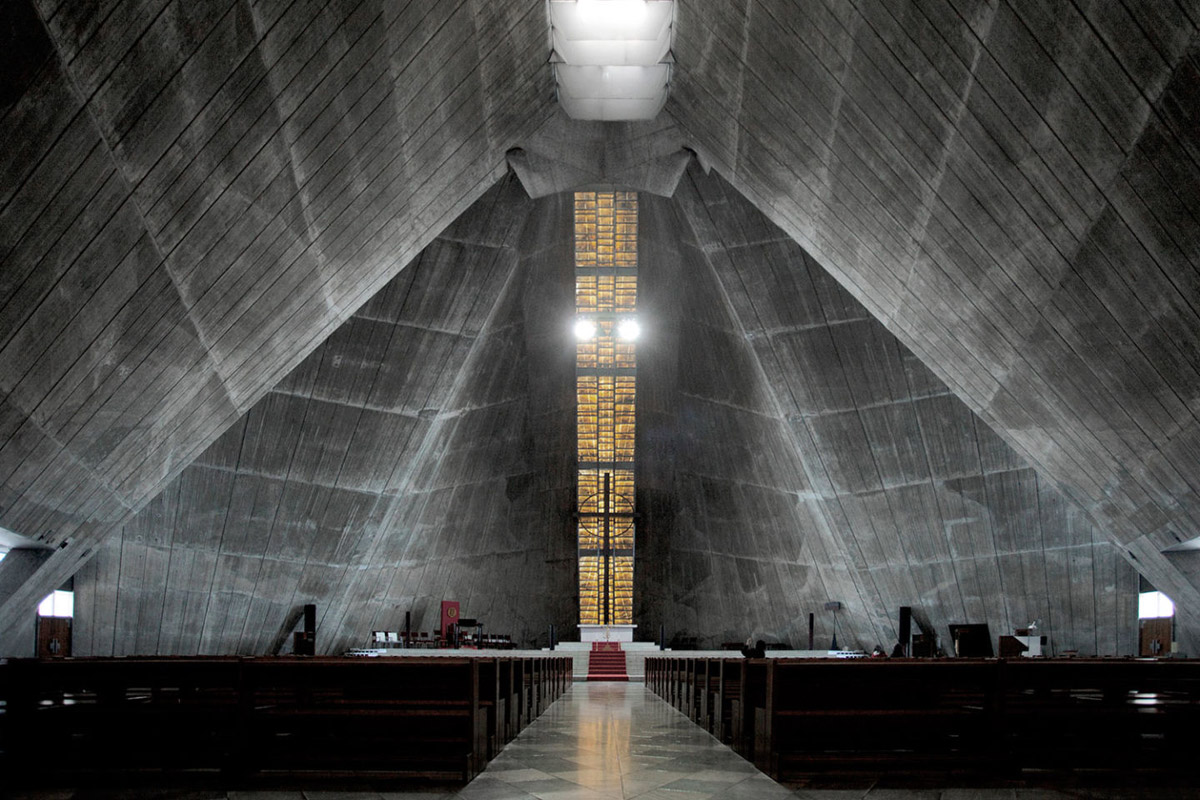 The St. Mary’s Cathedral was built in 1964 and designed by Kenzo Tange to replace the old wooden cathedral, in gothic style, burnt during wartime. Tange’s project is both Modernist and Metabolist, abstract and symbolic, bright (polished exterior), and dark (rough interior).

After experiencing their grandeur, trying to reach the sky, and their ineffably mystical spaces, I began to imagine new spaces, and I wanted to create them using modern technology. 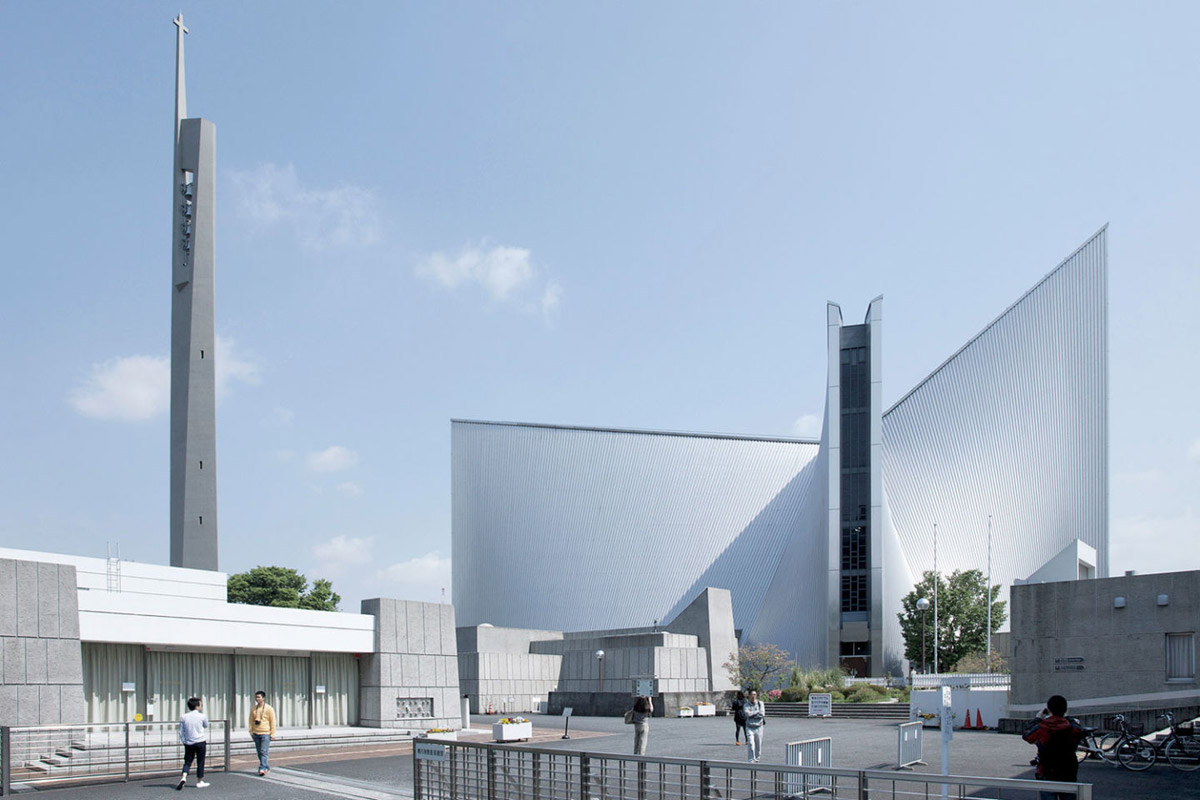 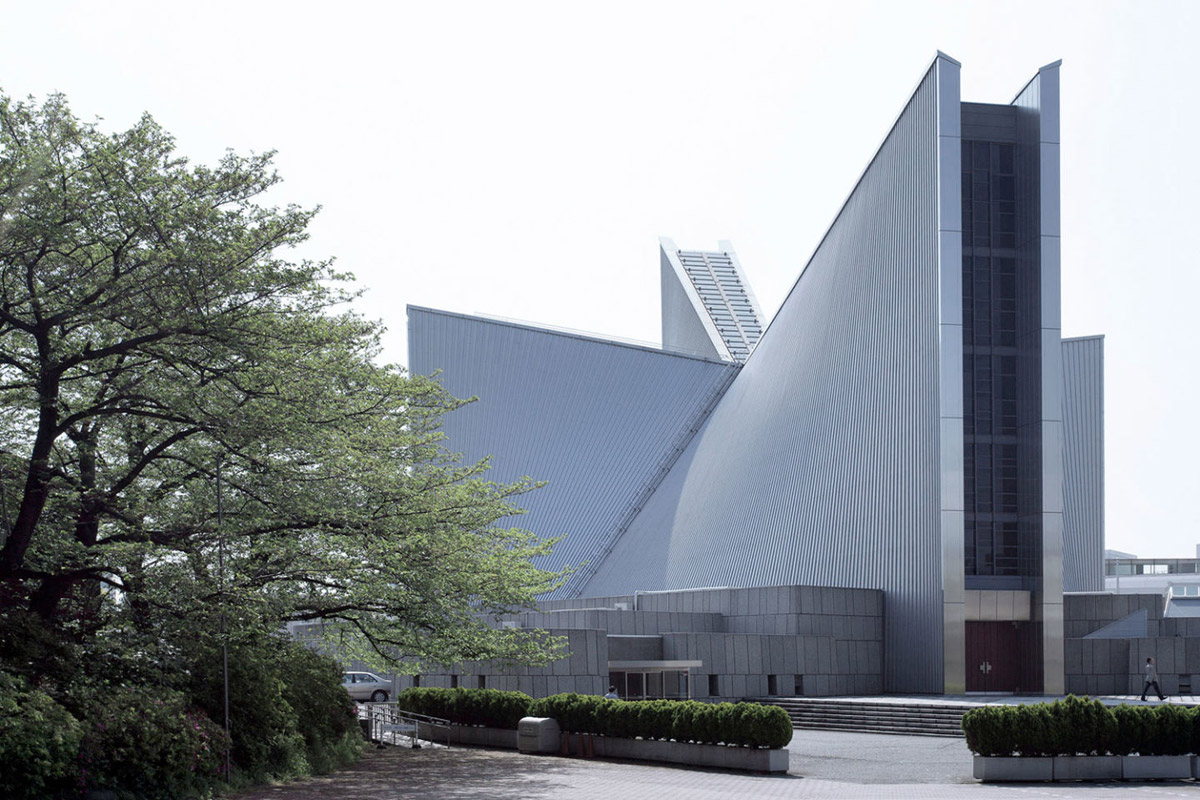 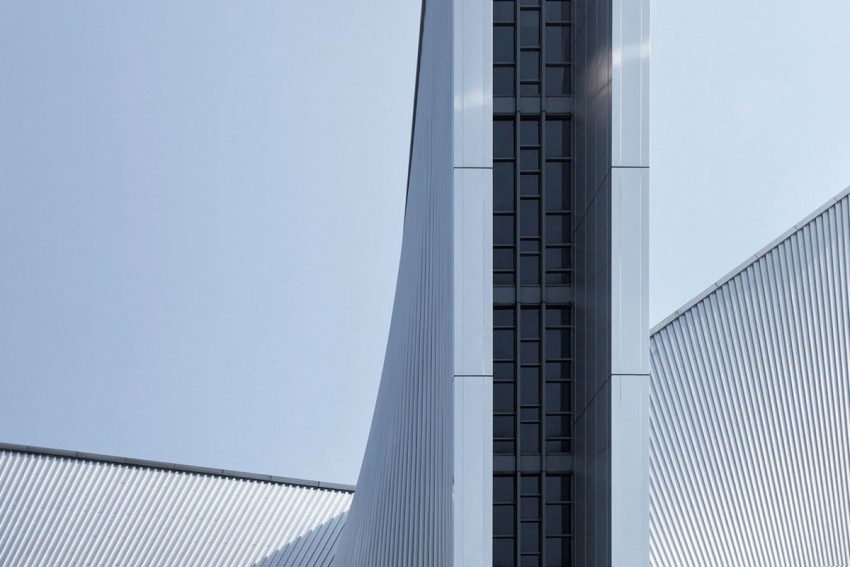 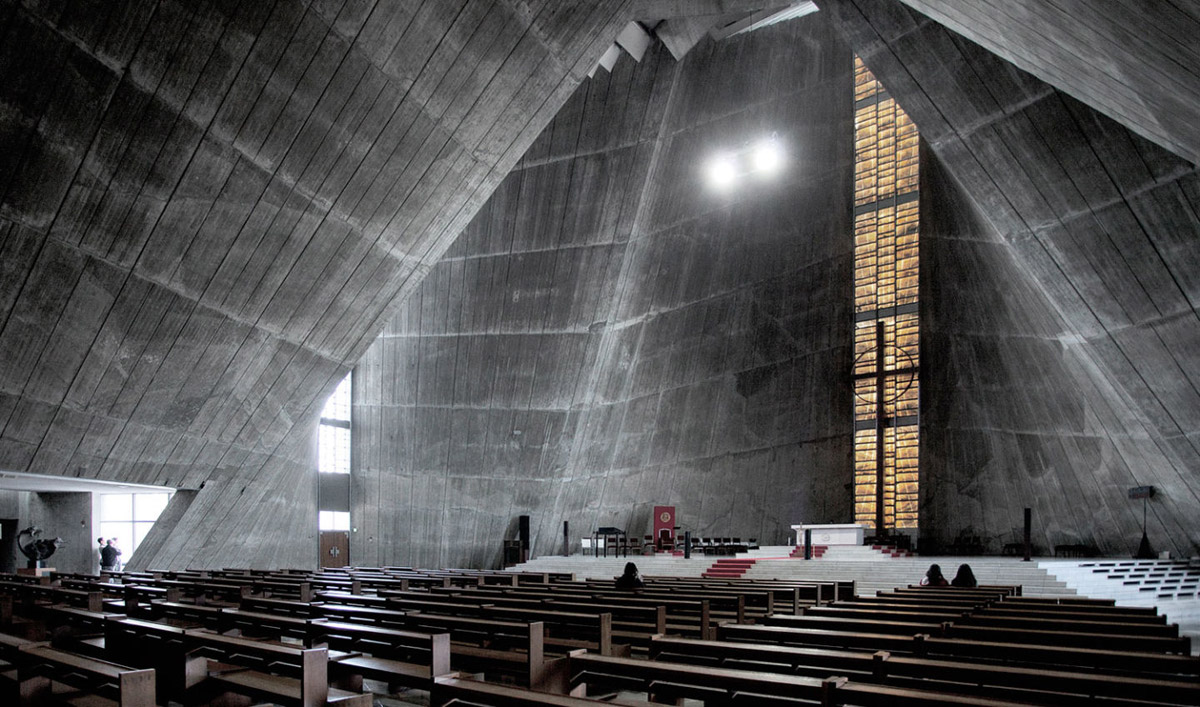 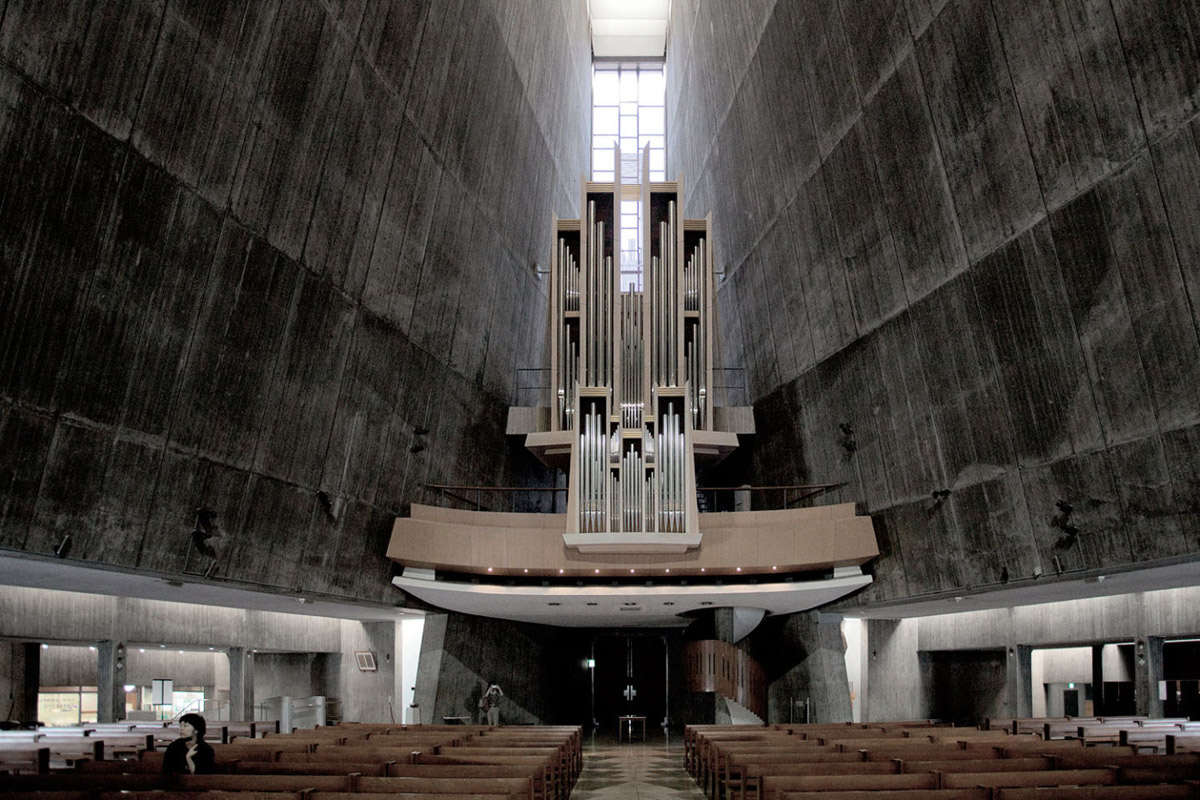 The Tokyo Cathedral was completed in 1964, replacing the old wooden cathedral burnt during wartime. Tange conceived the new church as a concrete structure, simple in concept and complex in shape, which recalls the lightness of a bird and its wings.

The building’s layout is in the form of a cross, from which eight hyperbolic parabolas rise like a contemporary landmark cathedral located in San Francisco, also referred to as St. Mary’s Cathedral.

The eight walls are at the same time roof and walls, enclosing the space and opening to the outside through vertical gaps.  The walls are curved hyperbolically to express the tension to the sky and turning the rhomboidal ground floor into a cross at the rooftop.

The layout of the building is in the form of a cross, from which eight hyperbolic parabolas rise like a contemporary landmark cathedral located in San Francisco, also referred to as St. Mary’s Cathedral.

The parabolas open upwards to form a cross of light, which continues vertically along the length of the four facades. To this rhomboid volume, other secondary constructions are added, including the baptistry and the baptismal font.

The rectangular shapes contrast with the symbolic character of the cathedral. The bell tower is 61.6 m (202 ft) high, standing a short distance away from the main building. The exterior cladding is made of stainless steel. In 2004 a large organ built by Italian firm Mascioni was installed.

The sunlight’s reflection on the stainless steel external cladding looks like a shining dress on the hard concrete slabs. Although it is a monochromatic cladding, the curves and the U-shaped profiles enhance the structure’s dynamicity. It all makes the church an iconic building in the dense urban context of Tokyo. 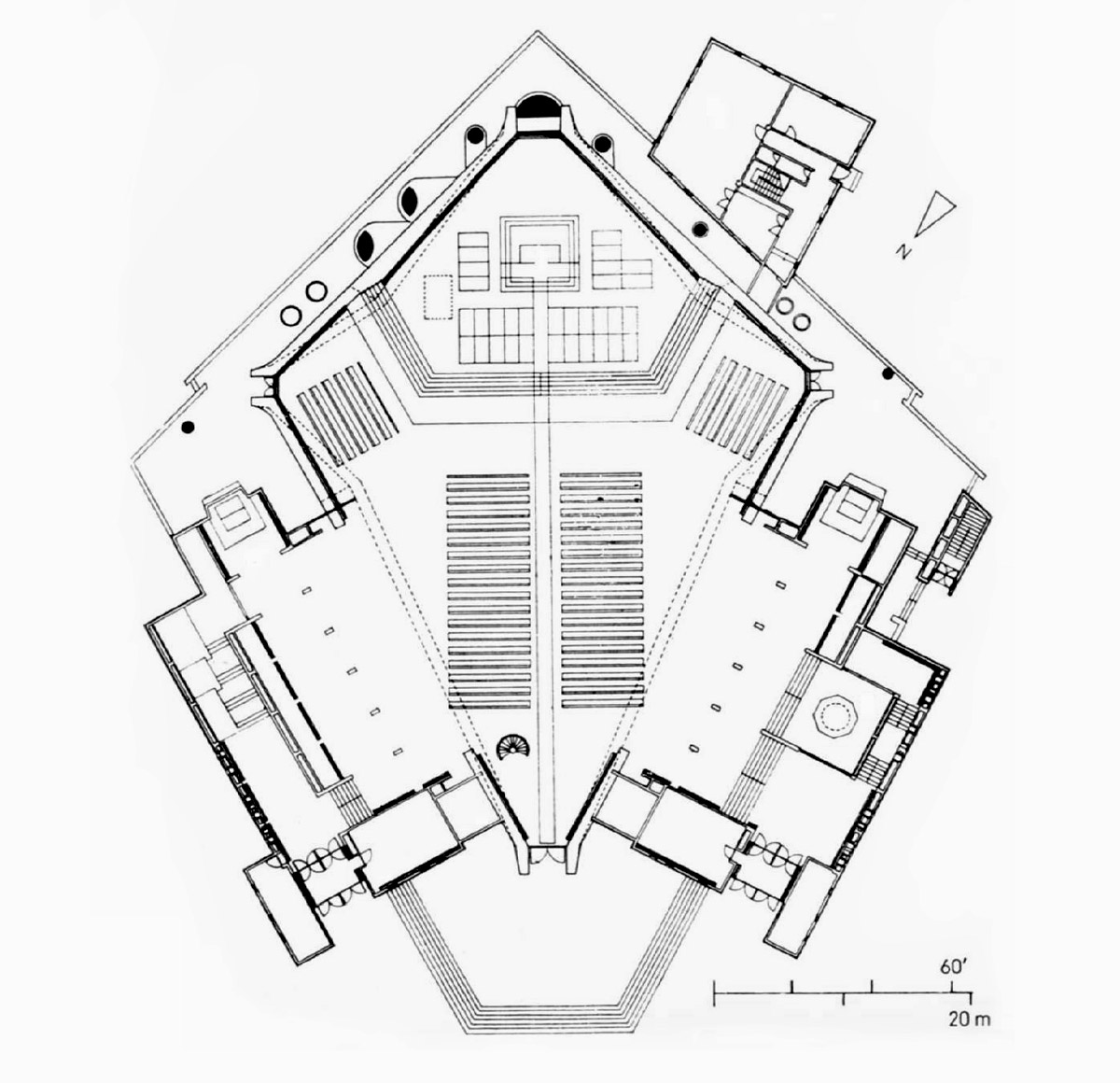 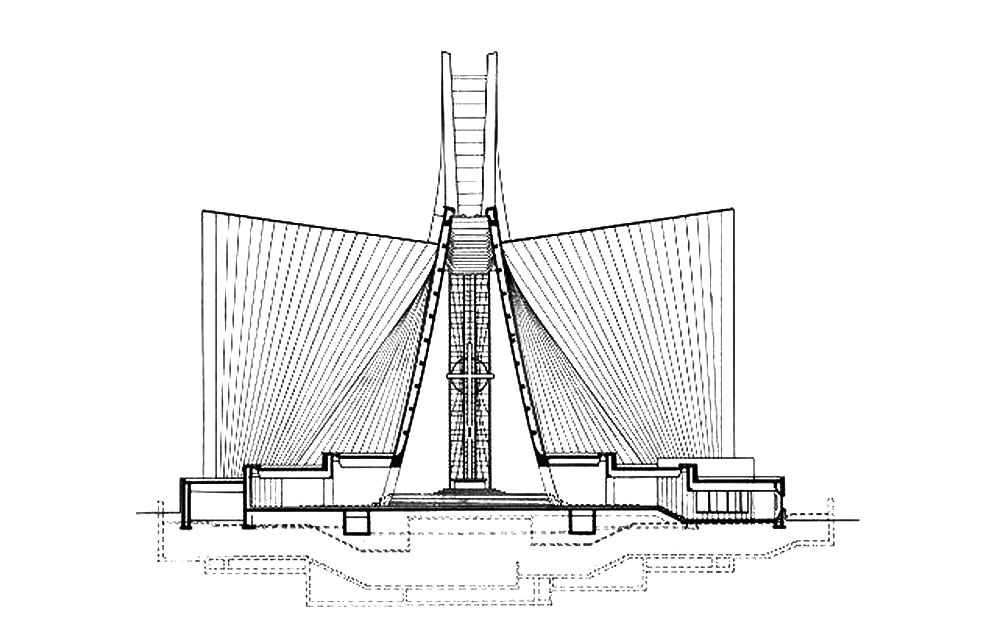 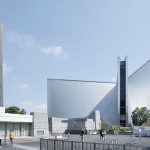 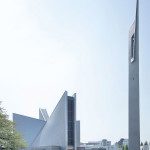 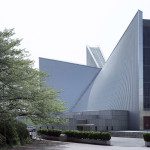 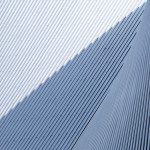 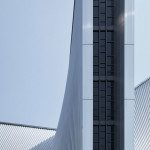 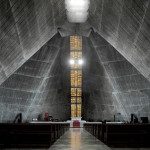 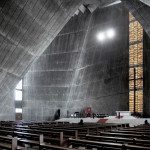 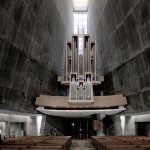 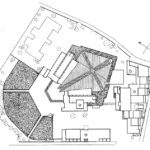 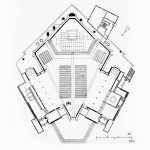 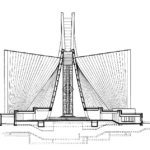 Kenzo Tange (1913 – 2005) was a Japanese architect and winner of the 1987 Pritzker Prize for architecture. He was one of the most significant architects of the 20th century, combining traditional Japanese styles with modernism. His career spanned the entire second half of the twentieth century, producing numerous distinctive buildings. Tange was also an influential patron of the Metabolist movement.

Influenced from an early age by the Swiss modernist Le Corbusier, Tange gained international recognition in 1949 when he won the competition for the design of Hiroshima Peace Memorial Park. He was a member of CIAM (Congres Internationaux d’Architecture Moderne) in the 1950s.

His university studies on urbanism put him in an ideal position to handle redevelopment projects after World War II. His ideas were explored in designs for Tokyo and Skopje.

Other works from Kenzo Tange