In 1973 well-known Spanish architect Ricardo Bofill (5 December 1939 – 14 January 2022) completed a summer house for his parents at the Emporda in Girona, Spain. Built on the ruins of an old country home, the family house is organized around a brightly red central courtyard that captures different surroundings’ views.

Fantasy – the unrestrained flow of imagination – is closer to delirium. Creativity, on the contrary, requires concentration, bringing ideas together into a coherent mechanism. I have been looking all my life for the equilibrium that would allow me to have the maximum personal freedom and the maximum creative freedom. But at the end of the day, total freedom – like absolute pleasure – does not exist. It is like a race of greyhounds chasing after nothing.

The summerhouse for the architect’s parents, set in a landscape of hills and woods, is located in the village of Montràs, a few miles from the Spanish Costa Brava, and was built around a country manor farmhouse in ruins. The layout is similar to a small town, and the ruins are incorporated into the house’s volumes. Ricardo Bofill and his team planned one of their unmistakable houses in a hilly region cultivated with orchards. The structure resembles a village house and merges with the ruins of a peasant hut made of rough stone walls and a tiled roof in the local Catalan style.

The complex consists of several pavilions arranged around a central exterior space occupied by the swimming pool and the main dining room, which stands as an independent pavilion. Sheathed in brown bricks, the pavilions are oriented towards the central swimming pool, the residence’s focal point. Various corners of relaxation, protected by high walls, contribute to the comfort of the spaces and steps used for sunning and connect the entire built pavilion.

The various volumes, built of pinkish brick, and the “red cage” of the dining room, covered with rectangular ceramics tiles, are projected towards the house’s interior. The space is made even more comfortable by many relaxation corners, shielded by walls that function as windbreaks, and is scenically tied to nearby volumes by terraced steps that act as a solarium.

The insertion of cypresses enhances the scenographic effect of the whole. An “obelisk” built of pink bricks, as an allusion to a petrified nature, and the shape of the windows, which play on the perspective offered by both the interior and the exterior, act as counterpoints to the trees. The site includes a house for the parents and independent rooms for each son, the grandchildren, and eventual guests. The dining room and kitchen communicate through a revolving door. The structure’s fundamental component is a 3m (10’) x 6m (20’) x 6m (20’) volume, completed by a bathroom and servant spaces.

Another volume houses the kitchen on the first floor and the custodian’s bedroom on the second floor. The dining room, low and large, occupies all the space of the red cage and faces the swimming pool. Two identical volumes create the wing reserved for the parents. On the first floor, the wings include a living room with a fireplace covered by a Catalan vault, a music room, and a bedroom. On the second floor is the library, and there’s a playroom and winter living room on the third floor.

All of the built forms, including the swimming pool, are built on a rectangular platform, a plinth to the entire house. The exterior cladding is dark brown gres sandstone, while the main dining room and the pool have been given an interior cladding of red ceramic.

The complex stands on a rectangular platform, clearly reminiscent of the stilobatos of a Greek temple or Mies van der Rohe’s Barcelona Pavilion. 2 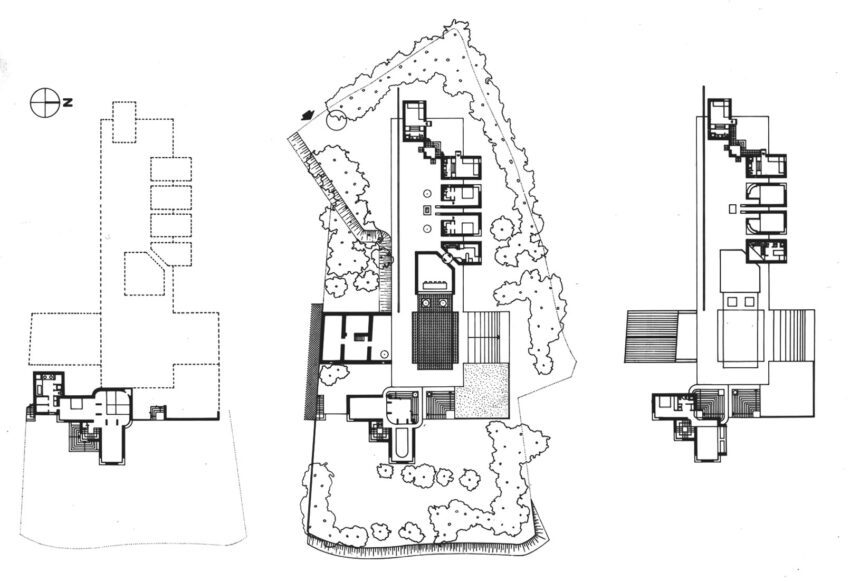 Ricardo Bofill Leví (5 December 1939 – 14 January 2022) was a Spanish architect. He founded Ricardo Bofill Taller de Arquitectura in 1963 and developed it into a leading international architectural and urban design practice. According to architectural historian Andrew Ayers, his creations rank “among the most impressive buildings of the 20th century.” Ricardo Bofill was born into a family of builders in 1939 in Barcelona. He studied at the Barcelona University School of Architecture and graduated from the School of Geneva. At the age of 17, Ricardo Bofill designed his first project, a summer home in Ibiza, and by 23, he became the lead architect of el Taller. Over fifty years later, Bofill still leads Ricardo Bofill Taller de Arquitectura, with over 1000 projects to date in over 50 countries.

Other works from Ricardo Bofill