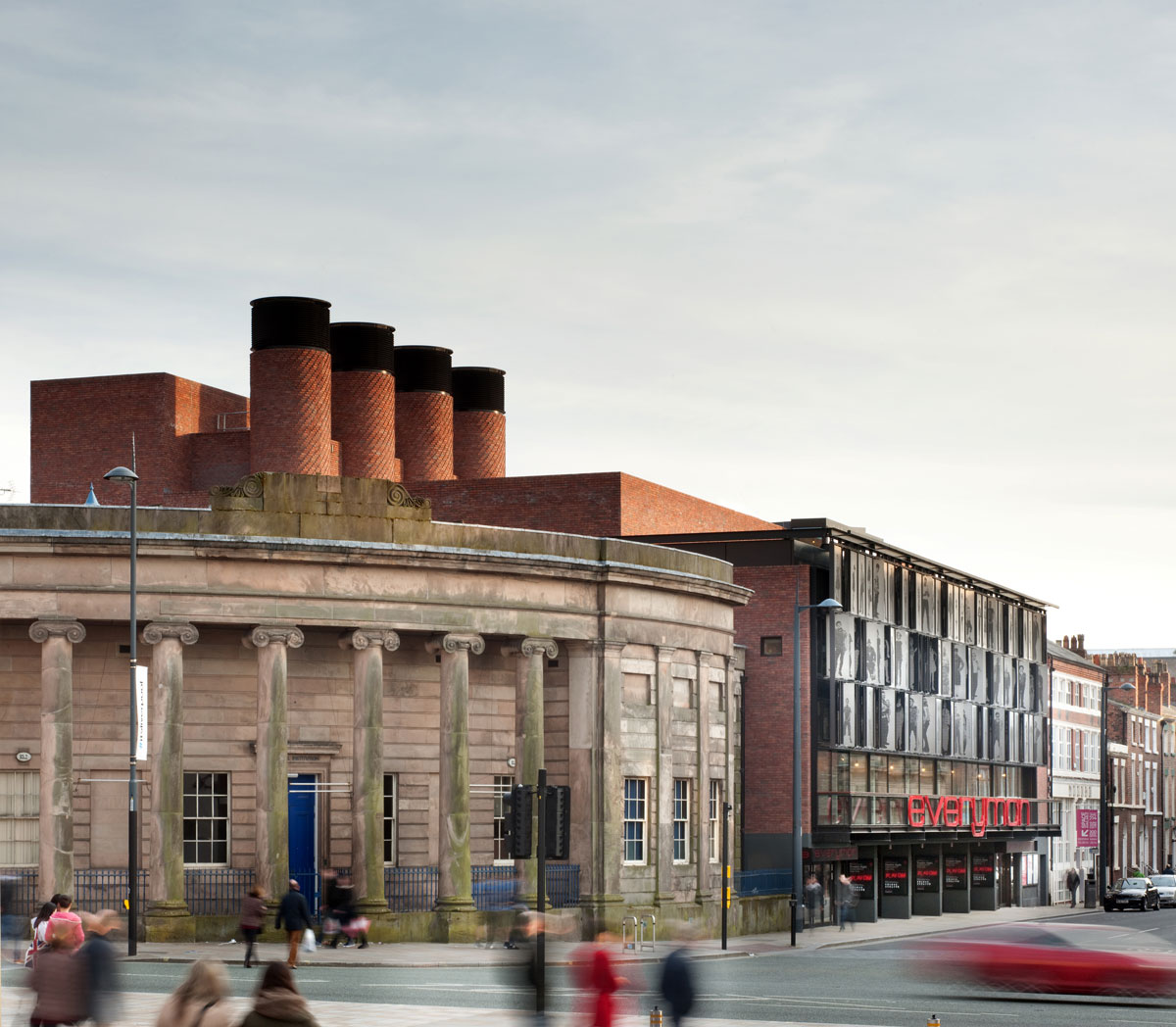 The Liverpool Everyman is a new theatre designed by Haworth Tompkins Architects for an internationally regarded producing company that has been conceived from the outset as an exemplar of sustainable good practice.

The building makes use of the complex and constrained site geometry by arranging the public spaces around a series of half levels, establishing a continuous winding promenade from street to auditorium 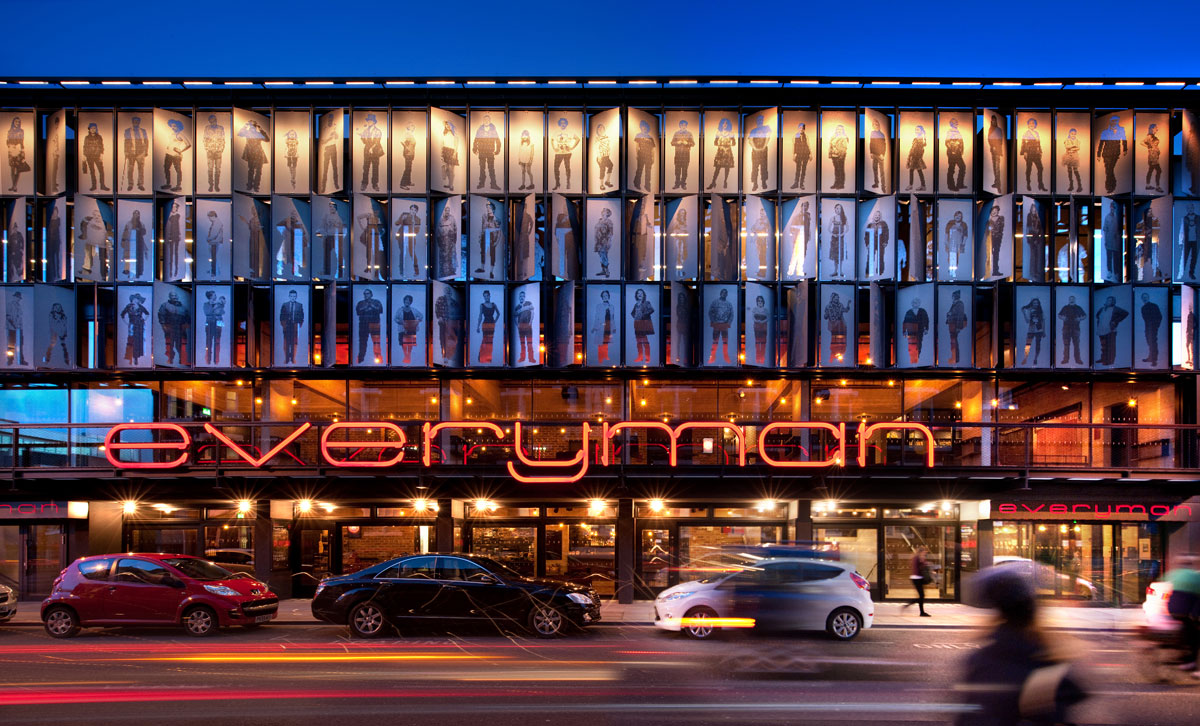 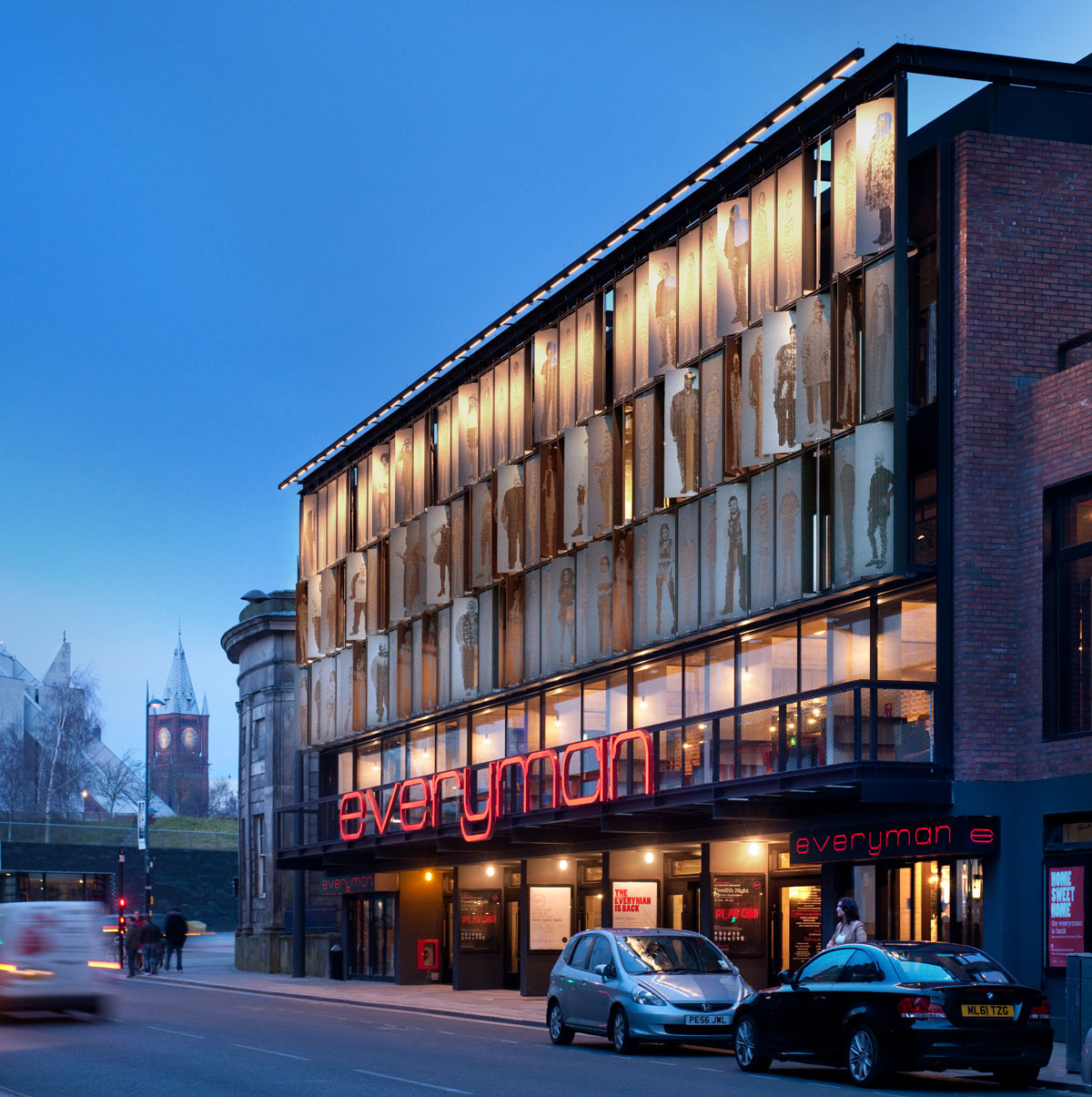 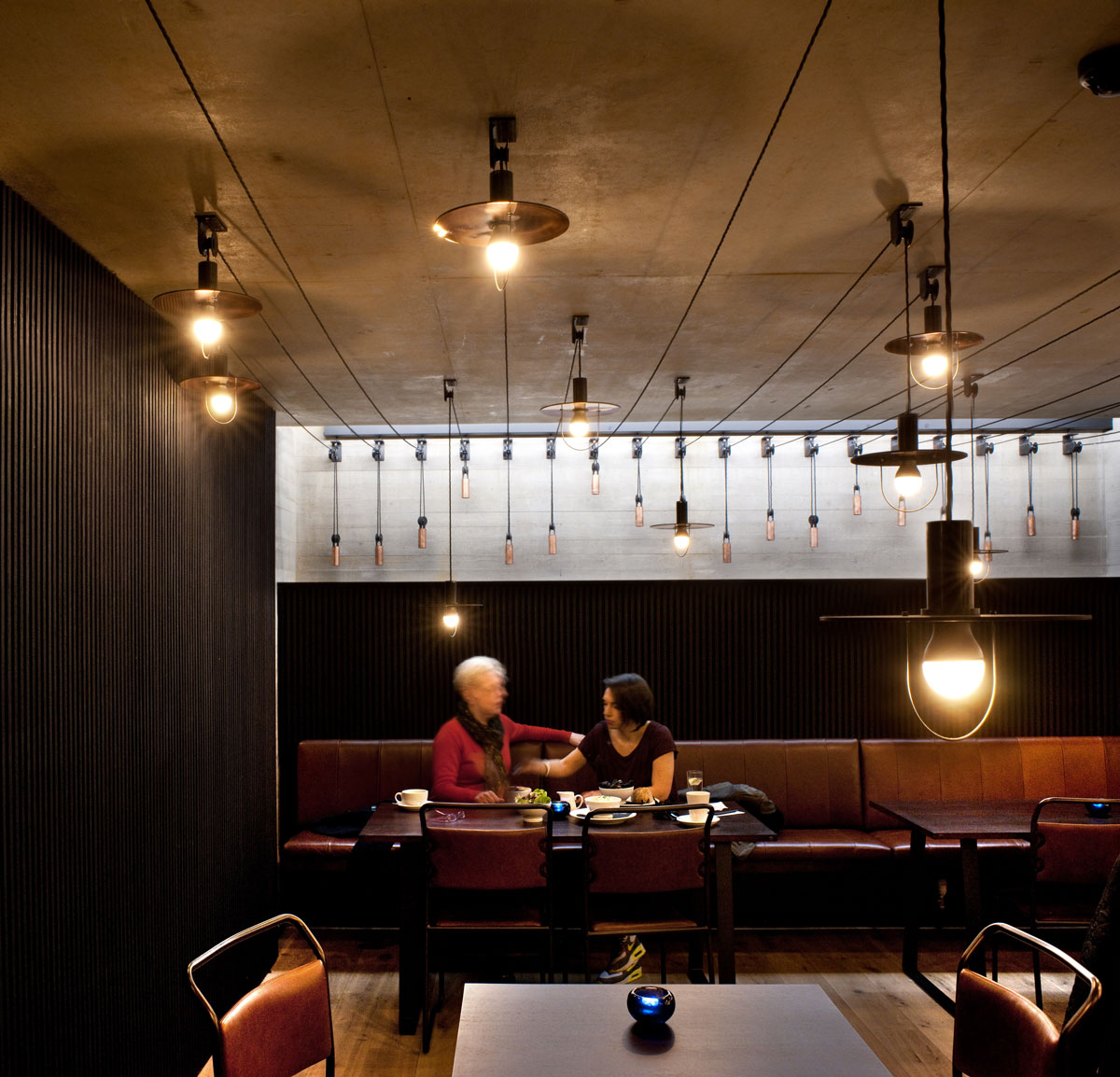 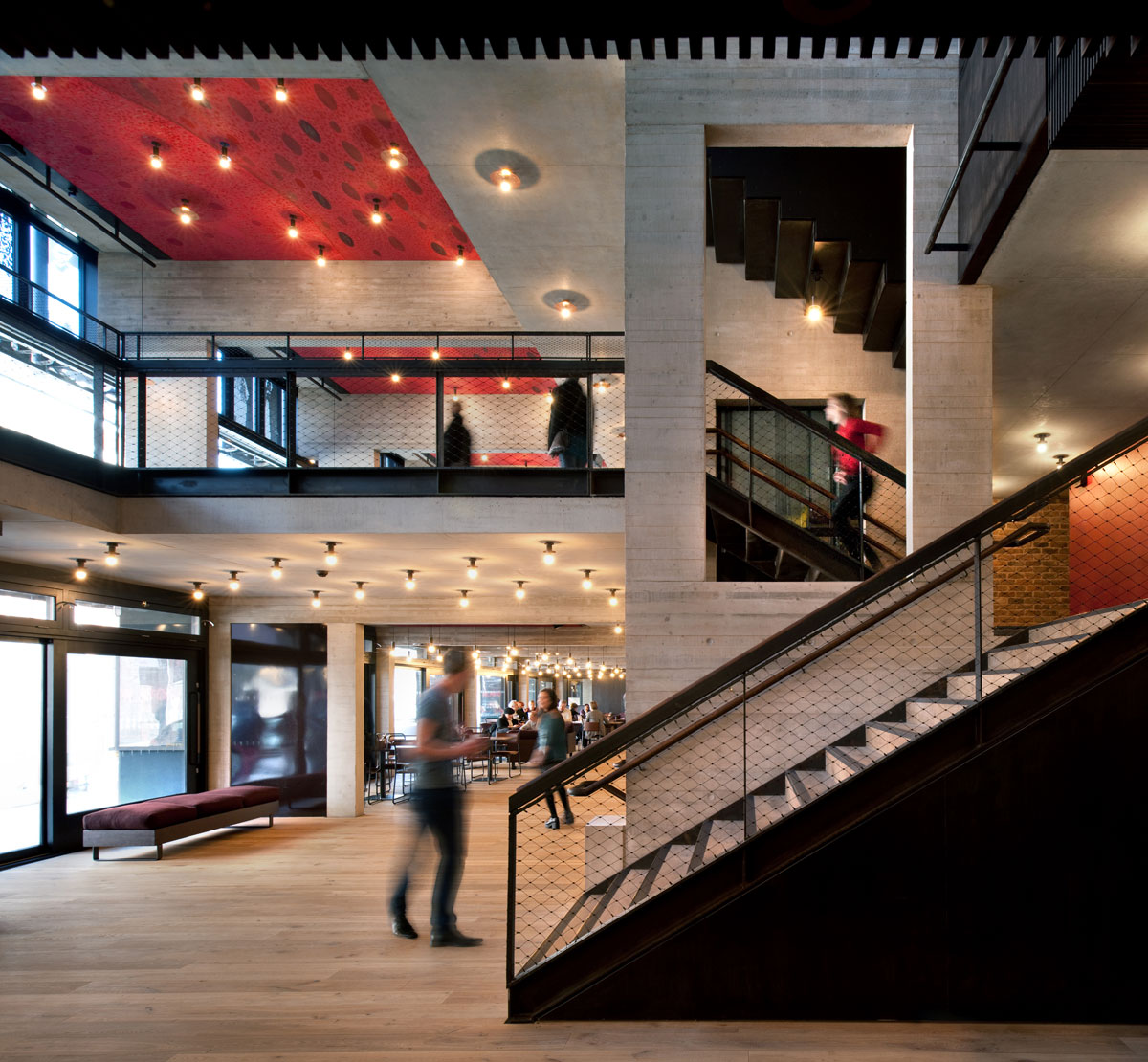 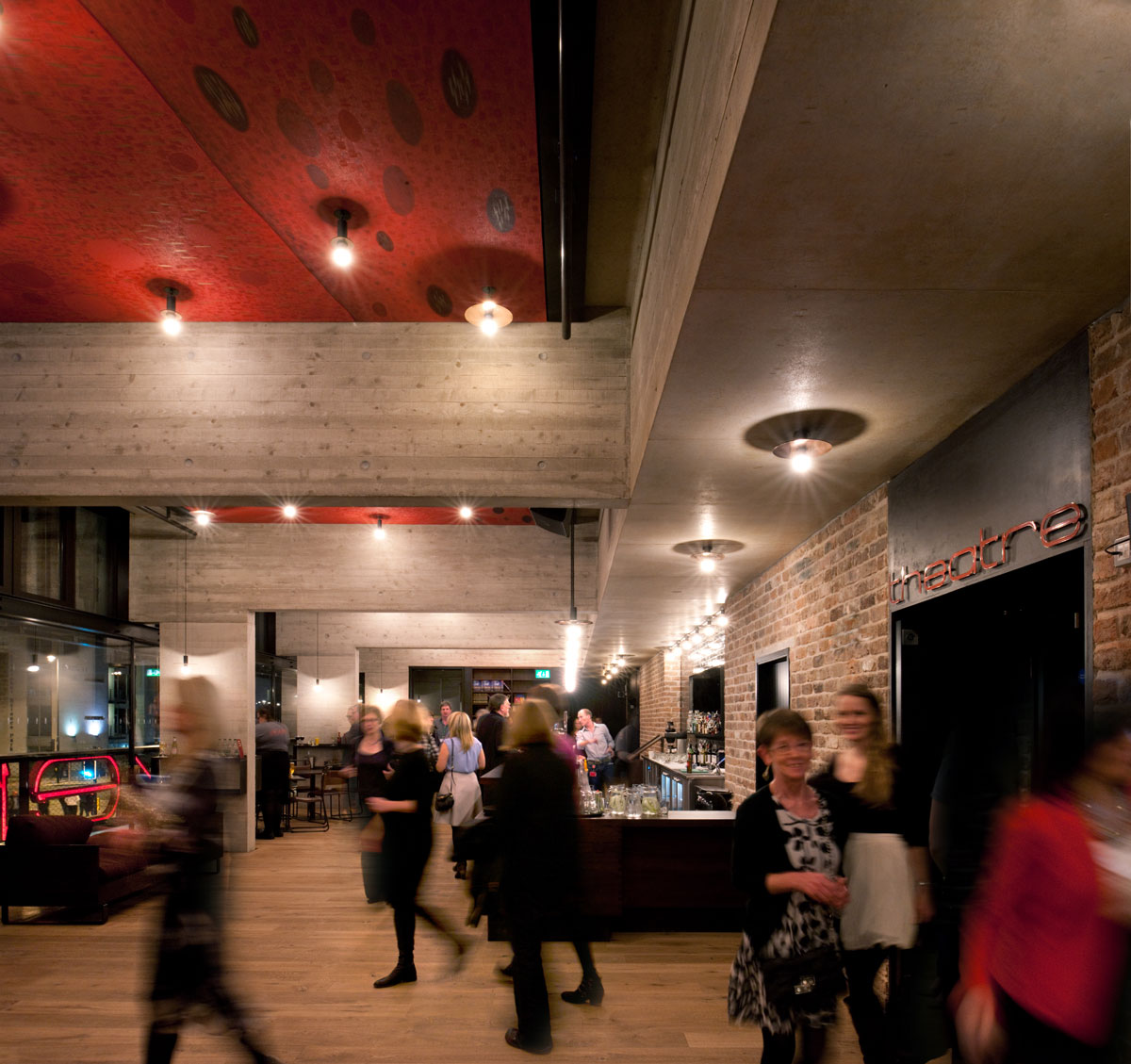 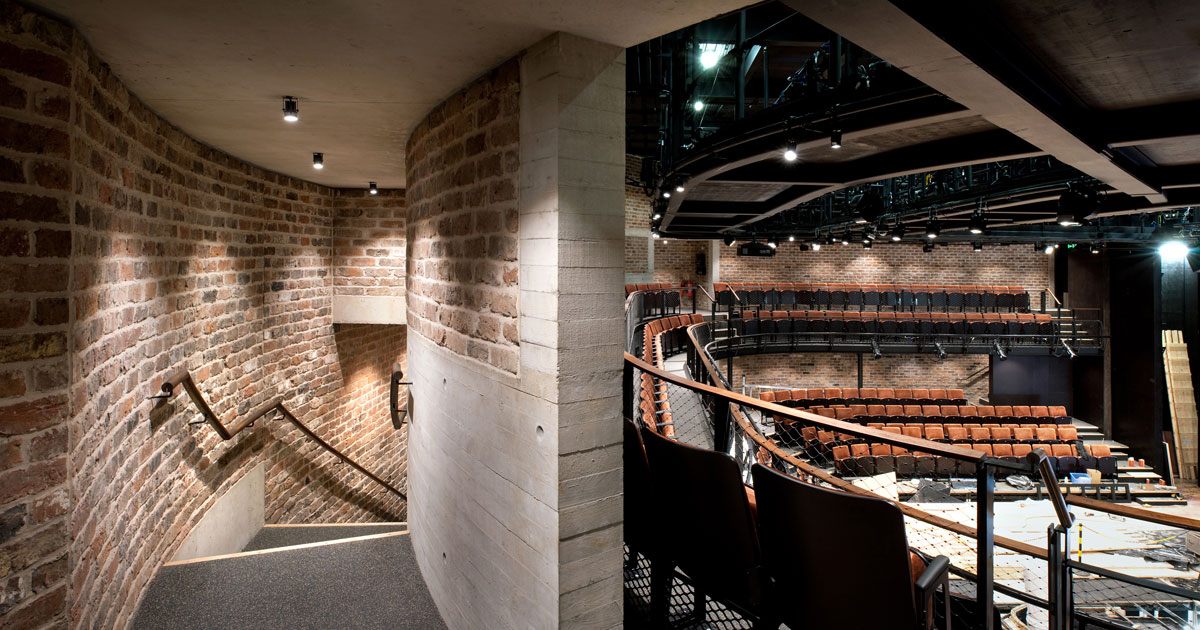 The Everyman holds an important place in Liverpool culture. The original theatre, converted from the 19th century revivalist chapel, had served the city well as a centre of creativity, conviviality and dissent (often centred in its subterranean Bistro) but by the new millennium the building was in need of complete replacement to serve a rapidly expanding production and participation programme. The design team’s brief was to design a technically advanced and highly adaptable new theatre that would retain the friendly, demotic accessibility of the old building, project the organisation’s values of cultural inclusion, community engagement and local creativity, and encapsulate the collective identity of the people of Liverpool. The new building occupies the same historic city centre site in Hope Street, immediately adjacent to Liverpool’s Catholic cathedral and surrounded by 18th and 19th century listed buildings, so a balance of sensitivity and announcement in the external public realm was a significant design criterion. Another central aspect of the brief was to design an urban public building with exceptional energy efficiency both in construction and in use.

The building makes use of the complex and constrained site geometry by arranging the public spaces around a series of half levels, establishing a continuous winding promenade from street to auditorium. Foyers and catering spaces are arranged on three levels including a new Bistro, culminating in a long piano nobile foyer overlooking the street. The auditorium is an adaptable thrust stage space of 400 seats, constructed from the reclaimed bricks of the chapel and manifesting itself as the internal walls of the foyers. The building incorporates numerous creative workspaces, with a
rehearsal room, workshops, an audio visual studio, a Writers’ Room overlooking the foyer, and EV1 – a special studio dedicated to the Young Everyman Playhouse, education and community groups. A diverse disability group has monitored the design from the outset.

Externally, red brick was selected for the walls and four large ventilation stacks, giving the building a distinct silhouette and meshing it into the surrounding architecture. The main west facing elevation of the building is as a large-scale public work of art consisting of 105 moveable metal sunshades, each one carrying a life-sized, water-jet cut portrait of a contemporary Liverpool resident. Working with local photographer Dan Kenyon, the project engaged every section of the city’s community in a series of public events, so that the completed building can be read as a collective family snapshot of
the population in all its diversity. Typographer and artist Jake Tilson created a special font for a new version of the iconic red ‘Everyman’ sign, whilst regular collaborating visual artist Antoni Malinowski made a large painted ceiling piece for the foyer, to complement an internal palette of brickwork, black steel, oak, reclaimed Iroko, deeply coloured plywood and pale in situ concrete.

The Everyman has been conceived from the outset as an exemplar of sustainable good practice. An earlier feasibility study had considered replacing the Playhouse and Everyman in a much larger and more expensive building on a new site, but Haworth Tompkins argued for the importance of continuity and compactness on the original site. Carefully dismantling the existing structure, the nineteenth century bricks were salvaged for reuse as the shell of the new auditorium and the majority of other material were recycled for use elsewhere.

As it was not possible to acquire a bigger site and demolish more adjoining buildings, it was necessary to make efficient use of the site footprint. Together with the client team the space brief was distilled into its densest and most adaptable form. Having minimised the space and material requirement of the project, the fabric was designed to achieve a BREEAM Excellent rating, unusual for an urban theatre building. Natural ventilation is used for all the main performance and workspaces.

Key design features of the building

In the auditorium, outdoor air is supplied to the audience without the need for mechanical assistance for the majority of the summer and all through the autumn and spring. This is achieved by drawing in air from an inlet to the rear and using the thermal mass of the large plenum under the workshop floor for pre-cooling. An air-source heat pump allows incoming air to be heated or cooled when necessary with fan assistance for smaller winter air volumes or as a boost during exceptionally high temperatures.

The air is then supplied to the space through an arrangement of openings behind and below the seats. The people and lighting help to warm the air, making it buoyant, and causing it rise to high level. From here, it is carried away through an acoustically attenuated exhaust plenum integrated within the technical gallery level to the exhaust chimneys.

The chimney’s height above the intake is required to achieve the stack effect and ensure the air flow is predominantly up and out. 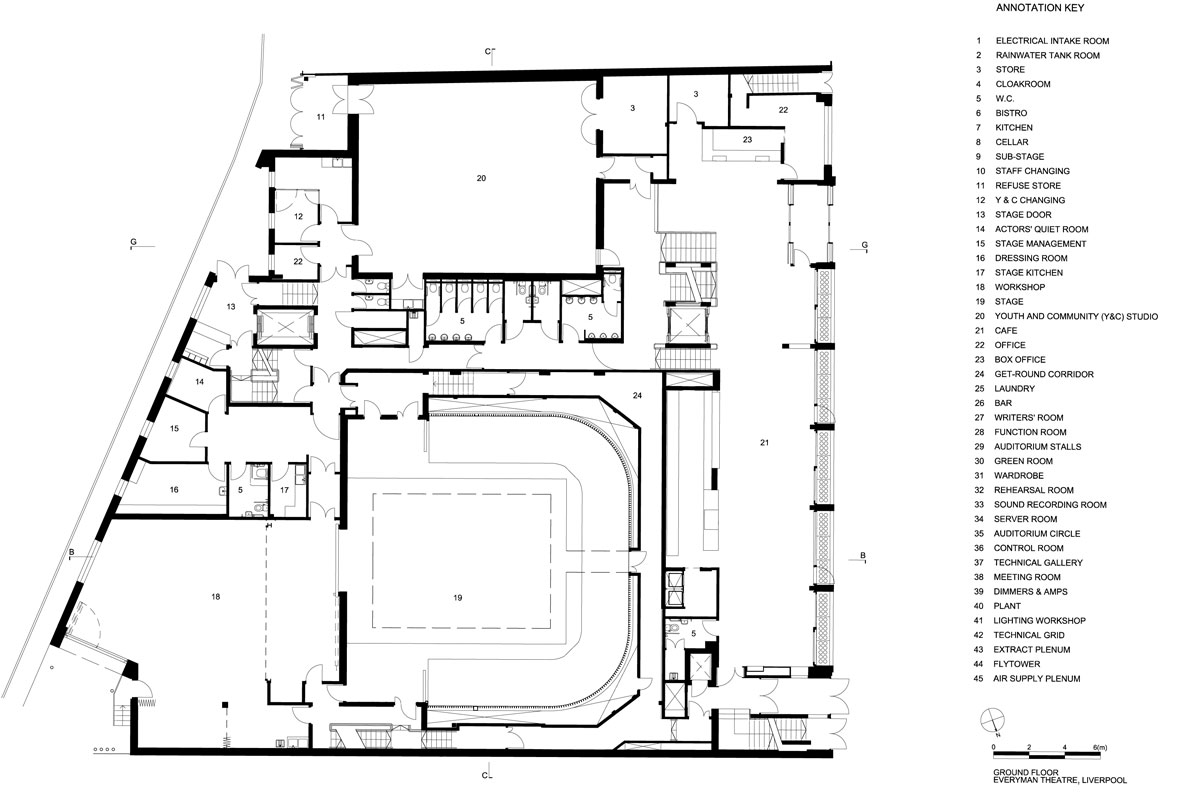 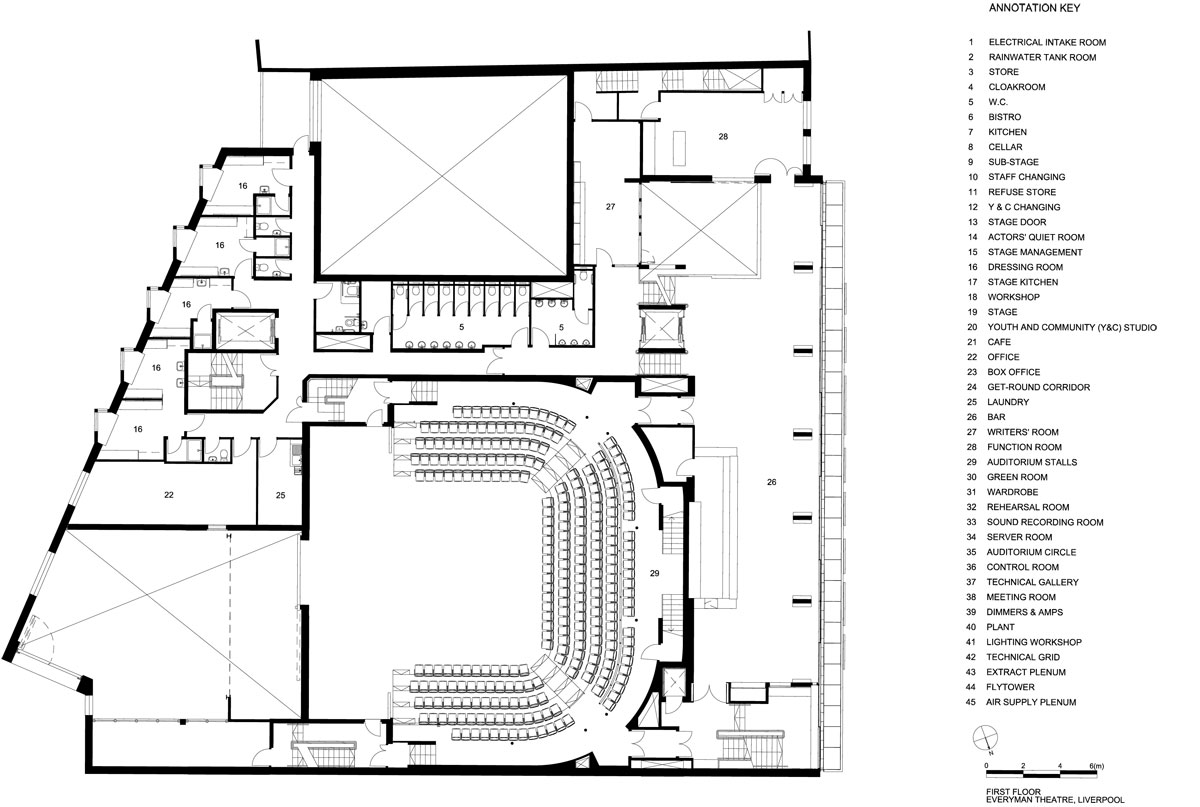 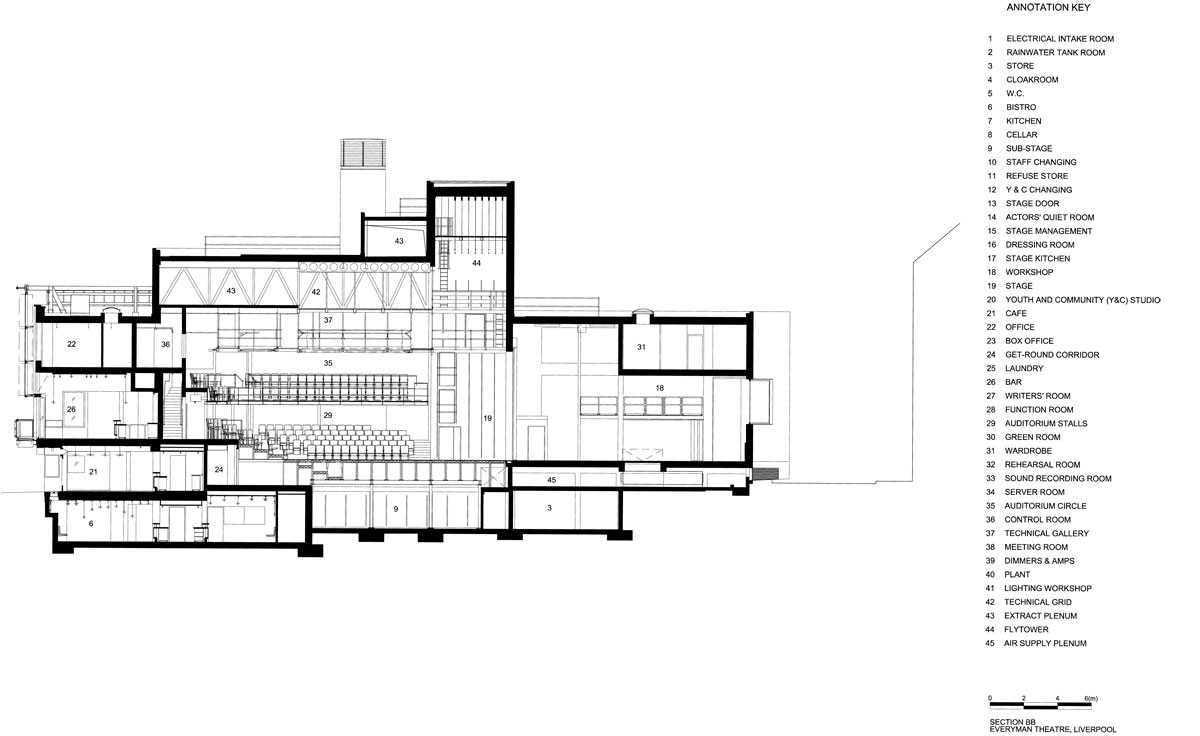 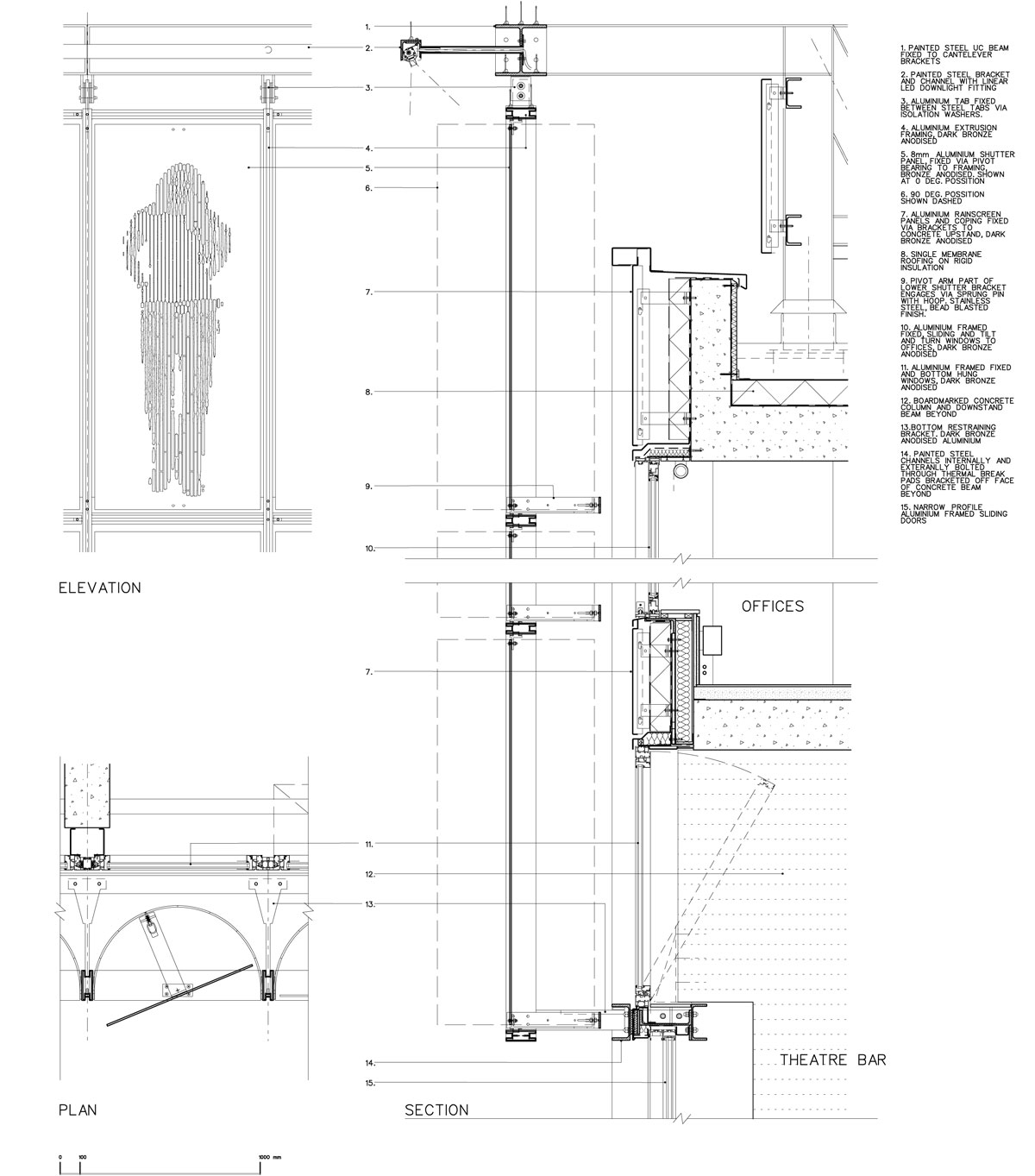 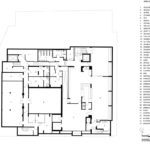 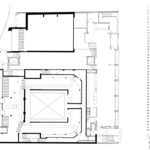 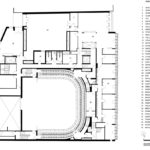 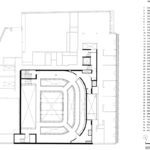 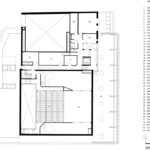 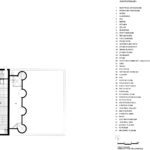 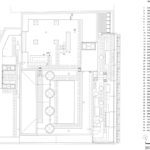 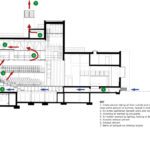 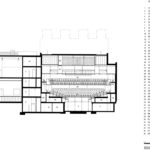 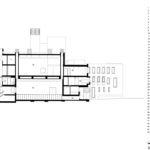 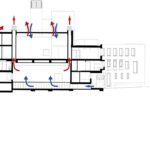 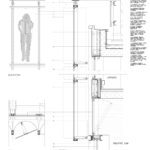