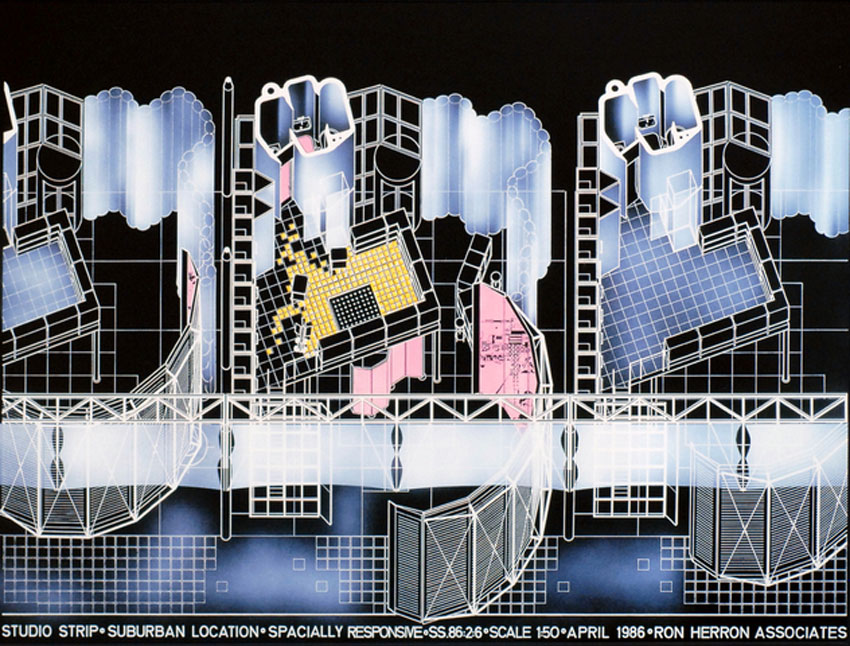 Designed by Ron Herron in 1986 the Studio Strip is a Speculative proposal for a strip of dwellings with fixed roof and frame and ‘drivable’ mobile walls, fittings and amenities. Early experiment with computer models and virtual environments.

The idea was to make a strip or terrace of studio dwellings which consisted purely of a roof on a frame. The parts that made up the house – the walls, upper floor and screen elements – were entirely robotised so they could be driven into other positions to respond to the user. 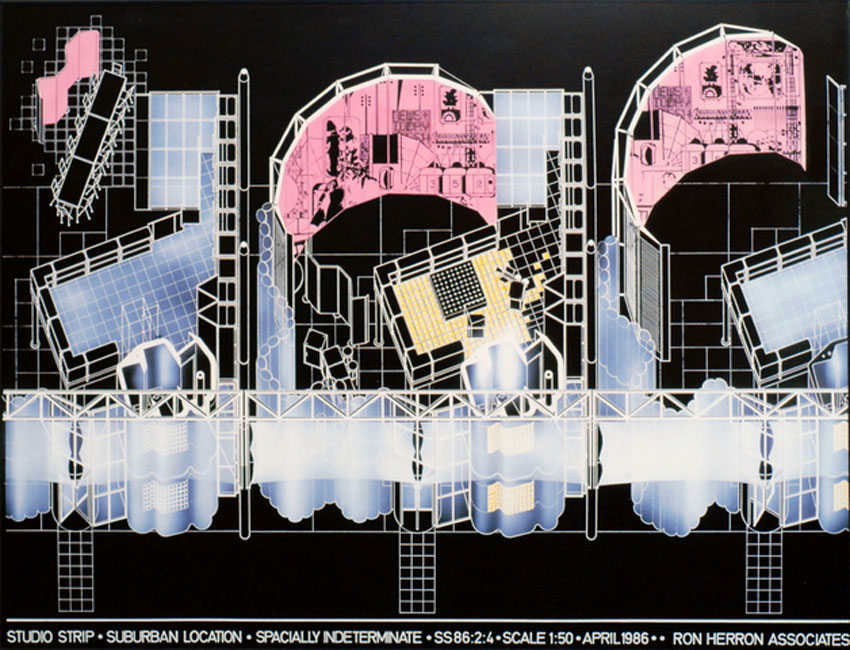 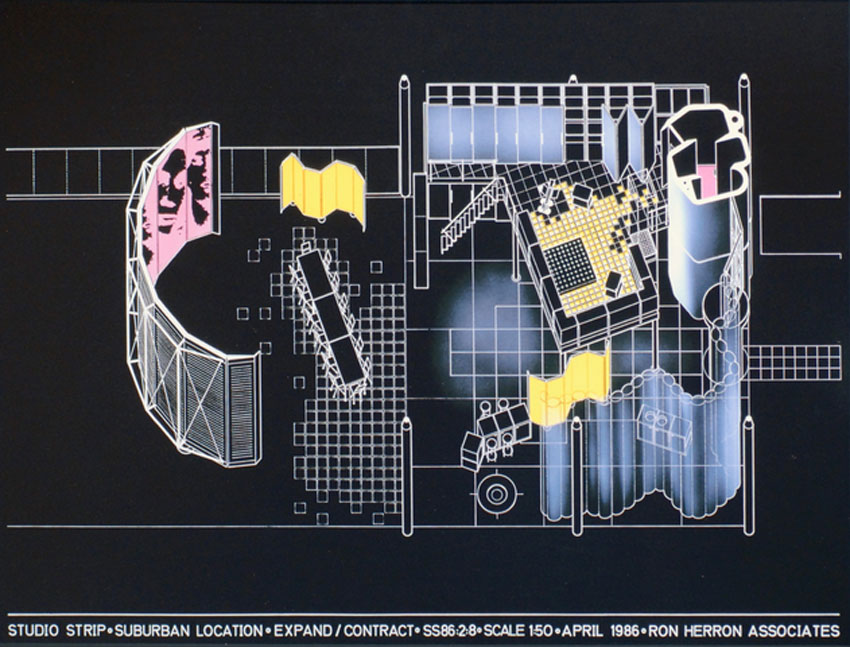 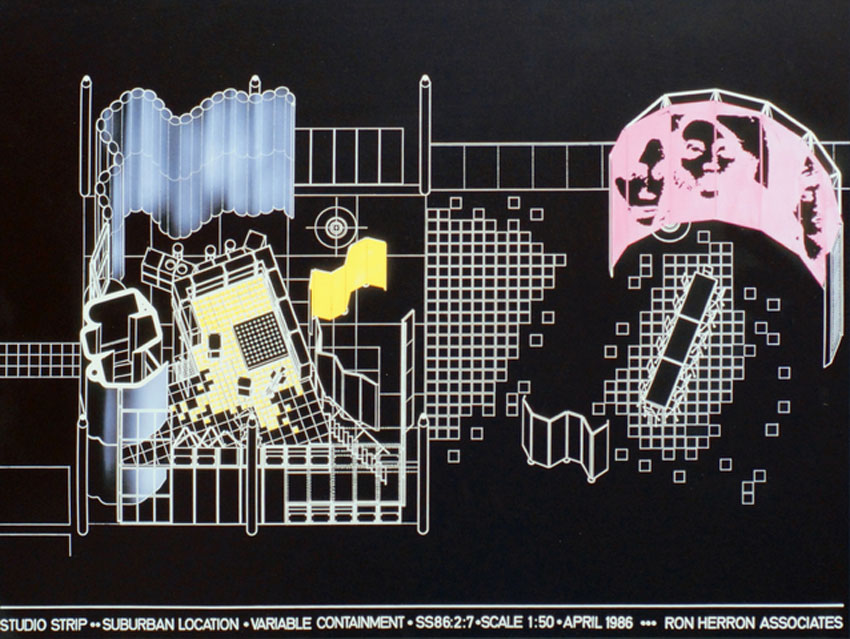 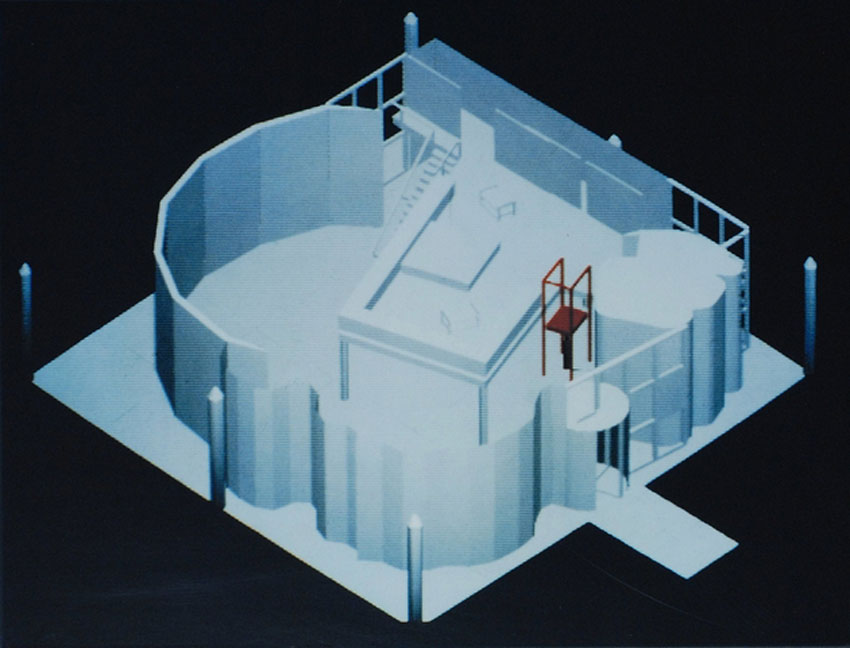 Following the Robohouse, Ron Herron made a project called Studio Strip, continuing his fascination with the idea of the robotised building which began with an early Archigram project, Control and Choice, and with the House for the Year 1990 exhibition at Harrods.

The idea was to make a strip or terrace of studio dwellings which consisted purely of a roof on a frame. The oddball thing was that the parts that made up the house – the walls, upper floor and screen elements – were entirely robotised so they could be driven into other positions to respond to the user. The screen on the garden side, for example, was a drivable curved video wall, some 15 metres long and 6 metres high, which could be hinged to open outwards. You could therefore see the real garden, or play a video on the wall of any environment that you wished to be in, or even drive the wall right out into the garden, taking the idea of indoor/outdoor architecture to an extreme.

The design was also of interest because it allowed experiments with early computer models, later an animation studio to animate it for Archigram. A video was made with Dennis Crompton, who did some trickery with the backcloths. This was eventually shown at the German Architecture Museum in the 1986 exhibition, Vision der Moderne. The video starts with an animated walk into the Studio Strip. Then you see Ron Herron sitting in the computer model with moving images on the video wall behind me – he is in a real space talking about real images. In the end sequence the screen opens and he is sitting in his own garden finishing the conversation.

This animation sequence was an early attempt of Archigram to simulate a real environment.

Archigram was an avant-garde architectural group formed in the 1960s – based at the Architectural Association, London – that was neofuturistic, anti-heroic and pro-consumerist, drawing inspiration from technology in order to create a new reality that was solely expressed through hypothetical projects.

The main members of the group were Peter Cook, Warren Chalk, Ron Herron, Dennis Crompton, Michael Webb and David Greene. Designer Theo Crosby was the “hidden hand” behind the group. He gave them coverage in Architectural Design magazine (where he was an editor from 1953–62), brought them to the attention of the Institute of Contemporary Arts (ICA) in London, where, in 1963, they mounted an exhibition called Living Cities, and in 1964 brought them into the Taylor Woodrow Design Group, which he headed, to take on experimental projects.

The pamphlet Archigram I was printed in 1961 to proclaim their ideas. Committed to a ‘high tech’, light weight, infra-structural approach that was focused towards survival technology, the group experimented with modular technology, mobility through the environment, space capsules and mass-consumer imagery. Their works offered a seductive vision of a glamorous future machine age; however, social and environmental issues were left unaddressed.