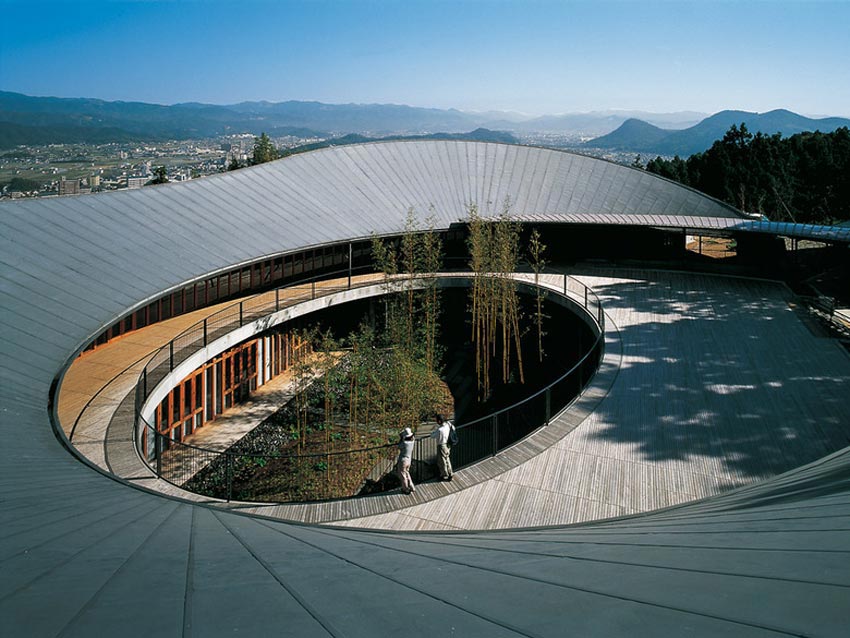 The Makino Museum of Plants in Koichi, Japan by Japanese architect Hiroshi Naito has a 2 levels structure constructed of laminated wood. Hiroshi Naito creates a simple, highly durable wooden structure taking care of the environmental issues in a gentle slope area, on the ridge of a forested mountain and the vicinity of  the sea coast.

Firstly we studied how the facility could be positioned without making it too conspicuous. Care has been taken to blend with surroundings using large roofs and low‐level buildings. Low‐level building arrangement done in order to limit impact on the local wind environment, and limit loads on the structure. 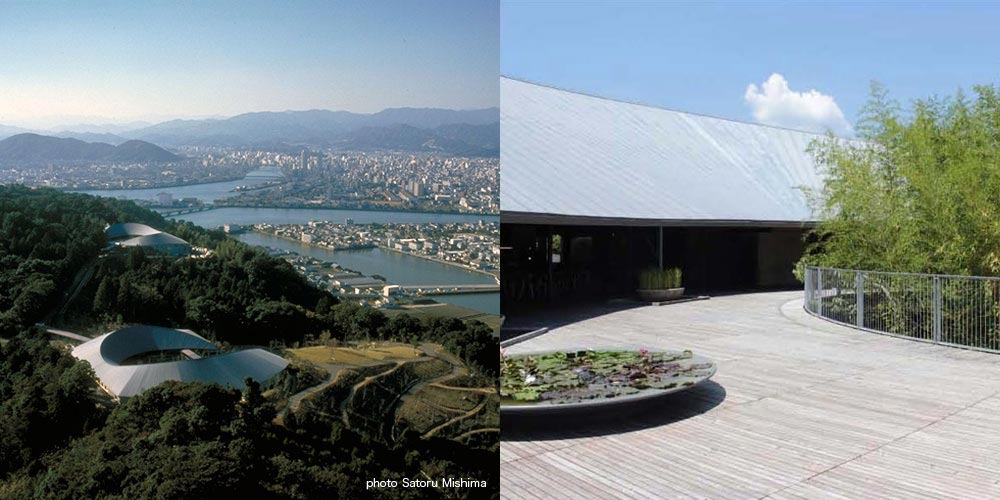 The purpose of this building was not only to house and research the vast collection of plant specimens and publications by Dr. Tomitaro Makino, the “Father of Japanese Botany”, but also to exhibit some of them to the public. The site is adjacent to the Makino Botanical Garden on Mount Godai in the outskirts of Kochi City, and stands on gently sloping land running along a ridge near the top of the mountain.

The site is divided into different areas, and the planned area for the building was quite large. Firstly, therefore, we studied how the facility could be positioned without making it too conspicuous. In the end, we divided it into two buildings (one mainly for archive storage, administration and research, the other mainly for public display), linked together by a passageway of just over 170m in length.

A building that would become one with this abundant landscape – that was the image I received when I first visited the site on a spur of Mt. Godai. […] Damp fallen leaves represent a state of organic life on the verge of decomposing and returning to nature […] a state of hugging the ground. Taking my intuited glimpse of their beauty as my point of departure, I began to grope toward the figure of the building. […]

Mt. Godai is not a large mountain, but the visitor discovers a unique atmosphere within its environs. I sought a building that would respond naturally to this air and conjoin with it to foster the environment. So many years from now, Kochi’s lush greenery will likely cover and conceal this building. […] The building will be buried in the forest, leaving only its central court and interior spaces, encompassed by roof. 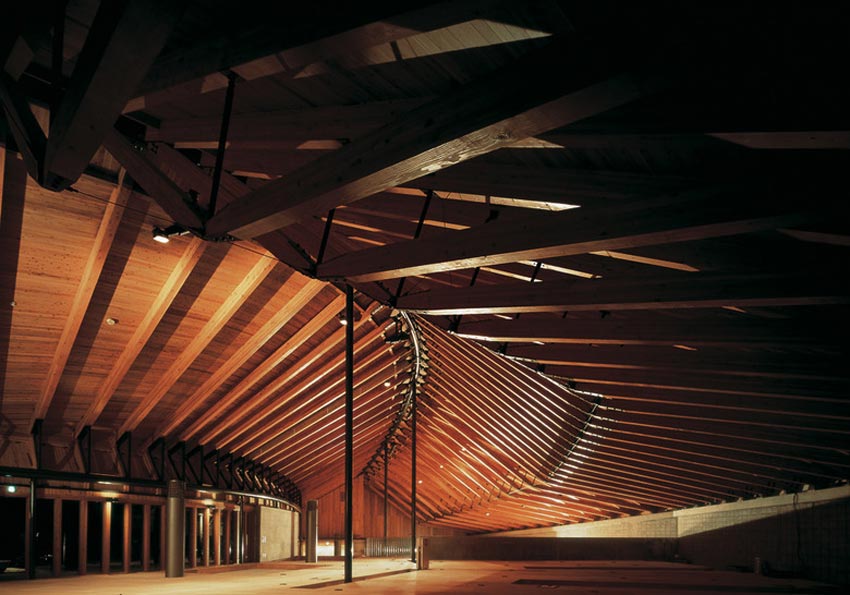 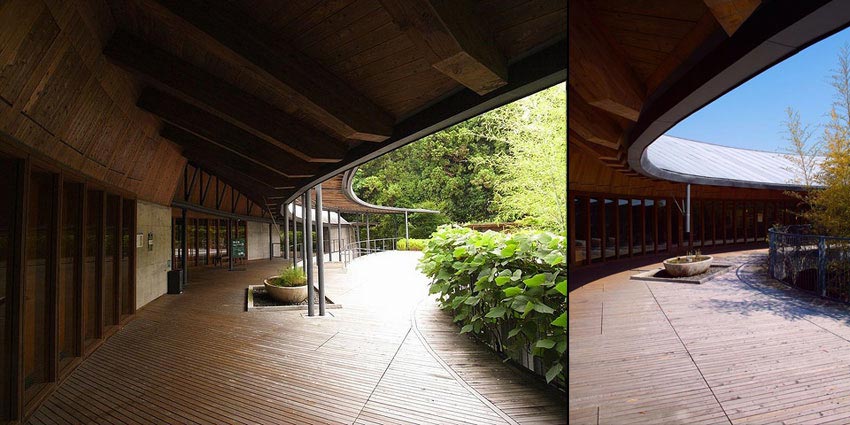 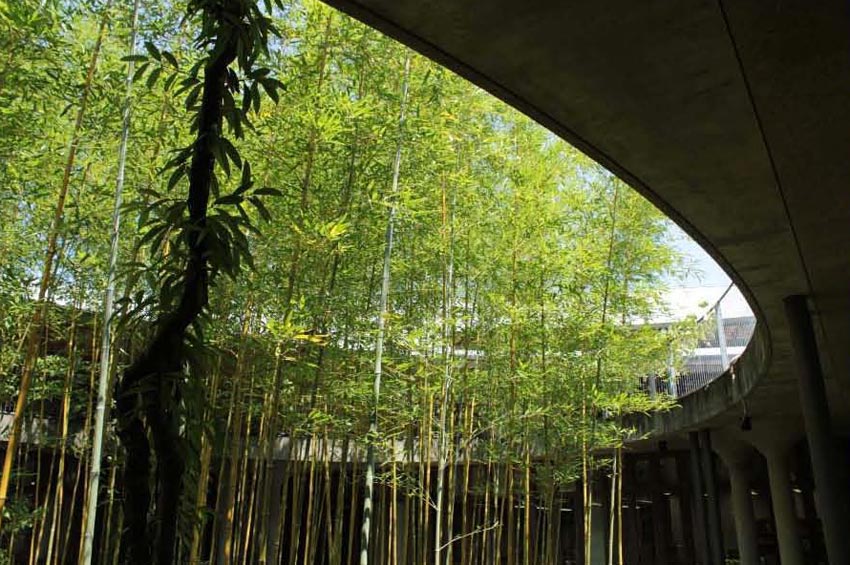 Care has been taken to blend with surroundings using large roofs and low‐level buildings. Low‐level building arrangement done in order to limit impact on the local wind environment, and limit loads on the structure. Trees and plants have been transplanted to avoid impact on landscape trees, based on surveys and studies of vegetation, plant phases and large‐diameter trees in the construction site. More than 500 different trees were planted around the buildings, and a
biotope was created using natural wind flow and water environment facilities.

Improved indoor environment and sunlight screening was obtained through creation of shades using deep canopies, low eaves and trees, and reduction of heat entering building by using roof materials with high sunlight reflection factor. External air cooling was prepared via cool tubes, using cool breeze from tree shade created by planting deciduous trees around external air intakes, and draw in cool breezes from tree shade in the summer. Reduction of energy load results of using pre‐cool external air before it reaches the air conditioners. Locally produced cedar and cypress, as well as laminated wood from Oregon pine, was used, as well as rubble excavated from the site to create masonry around outer walls. Use of rainwater was planned for roof sprinklers and water circulation to channels in the courtyard. Rainwater butts have been installed in the underground pit of the Exhibition Building. The water is used for roof sprinklers and water circulation to canals in the courtyard. The four ponds in the courtyard also have a cooling effect. 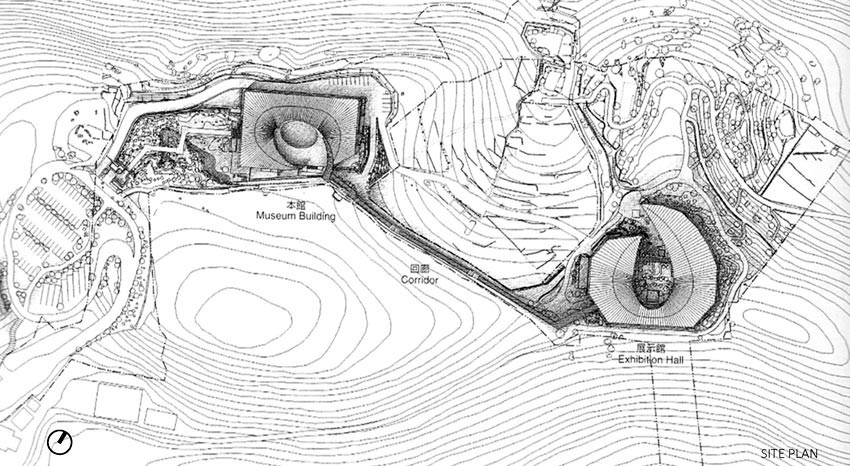 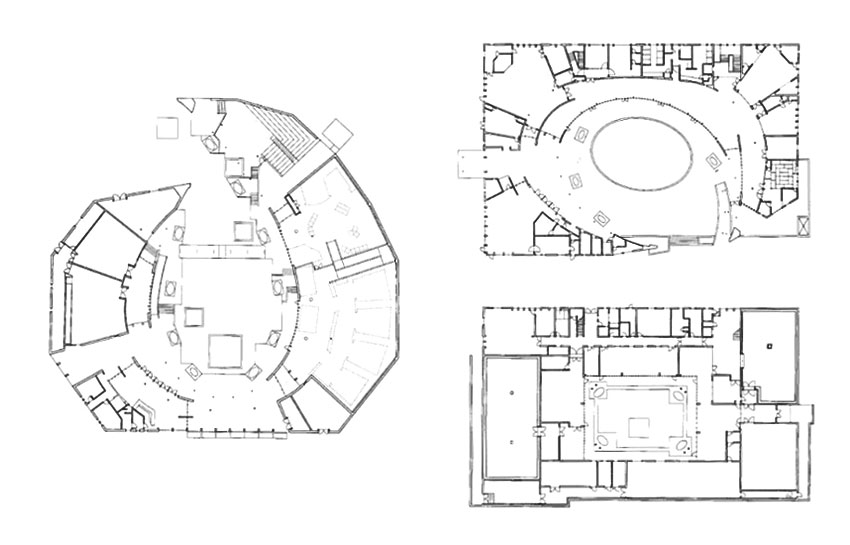 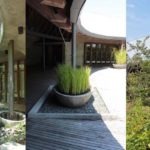 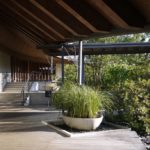 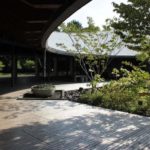 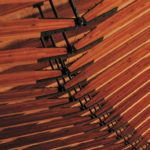 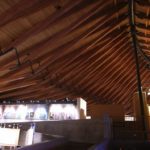 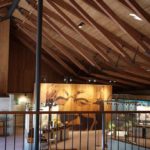 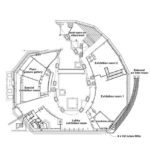 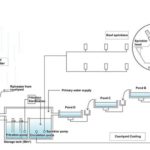