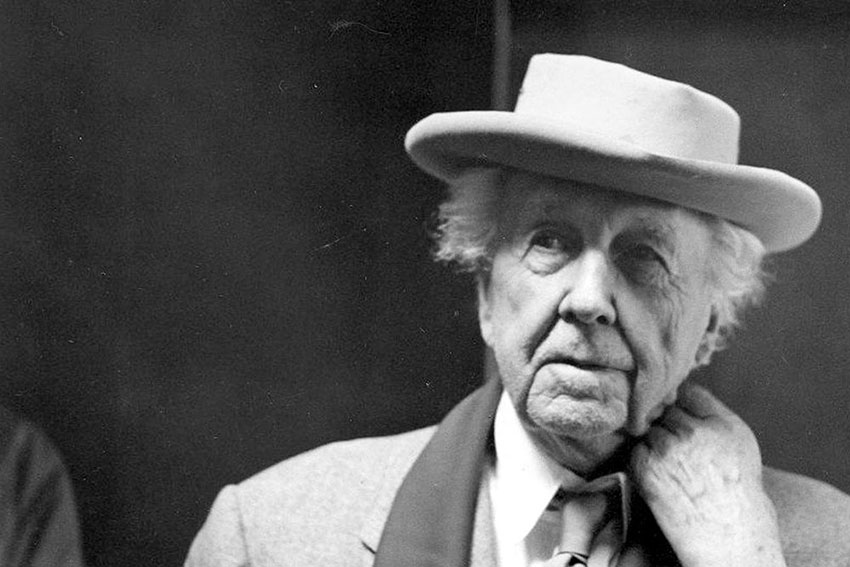 Ask the average citizen to name a famous American architect, and you can bet that their answer will be Frank Lloyd Wright. Wright gained such cultural primacy for a good reason: he changed the way we build and live. Designing 1,114 architectural works of all types — 532 of which were realized — created some of the most innovative spaces in the United States. Wright believed in designing in harmony with humanity and the environment, a philosophy he called organic architecture. This philosophy was exemplified in Fallingwater (1935). Wright played a key role in the twentieth century’s architectural movements, influencing generations of architects worldwide through his works. With a career that spanned seven decades before his death in 1959.

Wright wrote several books and numerous articles and was a popular lecturer in the United States and Europe. He was recognized in 1991 by the American Institute of Architects as “the greatest American architect of all time.” In 2019, a selection of his work became a listed World Heritage Site as The 20th-Century Architecture of Frank Lloyd Wright. His colorful personal life made headlines: leaving his first wife, Catherine Tobin, for Mamah Cheney in 1909, the murders at his Taliesin estate by a staff member in 1914, his tempestuous marriage with second wife Miriam Noel in 1923, and his relationship with Olgivanna Lazović, whom he married in 1928.

The mission of an architect is to help people understand how to make life more beautiful, the world a better one for living in, and to give reason, rhyme, and meaning to life.

Frank Lloyd Wright was born in Richland Center, Wis., on June 8, 1867, the son of William Carey Wright, a preacher and a musician, and Anna Lloyd Jones, a teacher whose large Welsh family had settled the valley area near Spring Green, Wisconsin. His early childhood was nomadic as his father traveled from one ministry position to another in Rhode Island, Iowa, and Massachusetts, before settling in Madison, Wis., in 1878. Wright’s parents divorced in 1885, making already challenging financial circumstances even more challenging. To help support the family, 18-year-old Frank Lloyd Wright worked for the dean of the University of Wisconsin’s engineering department while also studying at the university. But, he knew he wanted to be an architect. In 1887, he left Madison for Chicago.

He found work with two different firms before being hired by Adler and Sullivan’s prestigious partnership, working directly under Louis Sullivan for six years. He opened his own successful Chicago practice in 1893 and established a studio in his Oak Park, Illinois home in 1898. The William H. Winslow House was Wright’s first independent commission. While conservative compared to work of a few years later, with its broad sheltering roof and simple elegance, it attracted local attention.  Determined to create an indigenous American architecture, he set the standards for becoming known as the Prairie Style over the next sixteen years. These houses reflected the long, low horizontal prairie on which they sat with low-pitched roofs, deep overhangs, no attics or basements, and generally long rows of casement windows that further emphasized the horizontal theme.

In a Prairie house, “the essential nature of the box could be eliminated,” Wright explained. Interior walls were minimized to emphasize openness and community. “The relationship of inhabitants to the outside became more intimate; landscape and building became one, more harmonious; and instead of a separate thing set up independently of landscape and site, the building with landscape and site became inevitably one.”

Some of Wright’s most important residential works of the time are the Darwin D. Martin House in Buffalo, New York (1903), the Avery Coonley House in Riverside, Illinois (1907), and the Frederick C. Robie House in Chicago (1908). Important public commissions included the Larkin Company Administration Building in Buffalo (1903, demolished 1950) and Unity Temple in Oak Park (1905).

Creatively exhausted and emotionally restless, late in 1909, Wright left his family for an extended stay in Europe with Mamah Borthwick (Cheney), a client he had been in love with for several years. Wright hoped he could escape the weariness and discontent that now governed both his professional and domestic life. During this European hiatus, Wright worked on two publications of his work, published by Ernst Wasmuth, one of the Wasmuth Portfolio drawings, Ausgeführte Bauten und Entwürfe von Frank Lloyd Wright, and one of the photographs, Ausgeführte Bauten, both released in 1911.

These publications brought international recognition to his work and greatly influenced other architects.  The same year, Wright and Mamah returned to the States and, unwelcome in Chicago social circles, began constructing Taliesin near Spring Green as their home and refuge.  There he also resumed his architectural practice and, over the next several years, received two important public commissions: the first in 1913 for an entertainment center called Midway Gardens in Chicago; the second, in 1916, for the new Imperial Hotel in Tokyo, Japan.

In August 1914, Wright’s life with Mamah was tragically closed as she, her two children, and four others were killed in a brutal attack and fire, intentionally started by an angry Taliesin domestic employee. Emotionally and spiritually devastated by the tragedy, Wright was able to find solace only in work, and he began to rebuild Taliesin in Mamah’s memory. Once completed, he effectively abandoned it for nearly a decade. He pursued major work in Tokyo with the Imperial Hotel, which was demolished in 1968, and Los Angeles with the Hollyhock House and Olive Hill for oil heiress Aline Barnsdall.

The years between 1922 and 1934 were both architecturally creative and fiscally catastrophic. Wright had established an office in Los Angeles, but following his return from Japan in 1922, commissions were scarce, except for the four textile block houses of 1923–1924 (Millard, Storer, Freeman, and Ennis). He soon abandoned the West Coast and returned to Taliesin. While only a few projects went into construction, this decade was one of Wright’s great design innovations. Among the unbuilt commissions were the National Life Insurance Building (Chicago, 1924), the Gordon Strong Automobile Objective (Sugarloaf Mountain, Maryland, 1925), San Marcos-in-the-Desert resort (Chandler, Arizona, 1928), and St. Mark’s-in-the-Bowerie apartment towers (New York City, 1928).

With few architectural commissions coming his way, Wright turned to writing and lecturing, which introduced him to a larger national audience. Two important publications came out in 1932: An Autobiography and The Disappearing City. The first received widespread critical acclaim and would continue to inspire generations of young architects. The second introduced Wright’s scheme for Broadacre City, a utopian vision for decentralization that moved the city into the country. Although it received little serious consideration at the time, it would influence community development in unforeseen ways in the decades to come. At about this same time, Wright and Olgivanna founded an architectural school at Taliesin, the “Taliesin Fellowship,” an apprenticeship program to provide a total learning environment, integrating not only architecture and construction, but also farming, gardening, and cooking, and the study of nature, music, art, and dance.

At this same time, Wright decided he wanted a more permanent winter residence in Arizona, and he acquired some acreage of the raw, rugged desert in the foothills of the McDowell Mountains in Scottsdale.  Here he and the Taliesin Fellowship began constructing Taliesin West as a winter camp, a bold new endeavor for desert living where he tested design innovations, structural ideas, and building details that responded to the dramatic desert setting. Wright and the fellowship established migration patterns between Wisconsin and Arizona, which the Frank Lloyd Wright School of Architecture continues to this day.

Acknowledging Wright’s stunning reentry into the architectural spotlight, the Museum of Modern Art in New York staged a comprehensive retrospective exhibition that opened in 1940. In June 1943, undeterred by a world at war, Wright received a letter that initiated his most important and most challenging commission during his late-career. Baroness Hilla von Rebay wrote asking him to design a building to house the Solomon R. Guggenheim collection of non-objective paintings. Wright responded enthusiastically, never anticipating the tremendous amount of time and energy this project would consume before its completion sixteen years later.

He was still actively involved with all aspects of work, including frequent trips to New York to oversee the Guggenheim Museum’s construction. In April of 1959, he was suddenly stricken by an illness that forced his hospitalization. He died April 9, two months shy of his ninety-second birthday.

Wright devoted his life to promoting architecture as “the great mother art, behind which all others are definitely, distinctly and inevitably related.” Seeking a consistent expression of underlying unity, he drew inspiration from the Japanese idea of a culture in which every object, every human, and every action were integrated to make an entire civilization a work of art. Above all else, Wright’s vision served beauty. He believed that every man, woman, and child had the right to live a beautiful life in beautiful circumstances. He sought to create an affordable architecture that served that aspiration.

This bibliography consists of a selective list of books relating to the architects’ Architecture.

See all Works of the architect featured in ArchEyes.