The Great Mosque of Samarra & The Abu Dulaf Mosque

The Great Mosque of Samarra and the Abu Dulaf Mosque were built in the 9th century, and they both testify to the architectural and artistic innovations developed in the region. In 1976,  the iconic spiral minarets inspired Pritzker Architecture Prize winner Philip Johnson’s design for the Chapel of Thanksgiving in Dallas, Texas, and in 2007 the two structures were inscribed as a UNESCO World Heritage Site as part of Samarra Archaeological City.

The construction of two mosques within a 20 years time difference in the 9th century was the symbol of the region’s faith and power.

The Great Mosque of Samarra Photographs

History of the Great Mosque of Samarra

In the 9th century, Samarra’s city was unique in many ways. The construction of two mosques within a 20 years time difference was the symbol of the region’s faith and power. The two structures share similarities as, for instance, the Minarets (Almalwiya) of both Mosques, which were built with the same spiral-shaped staircase. Despite the similarities between the two, they also differ greatly in many ways.

The unique design of Mosques and their Minarets inspired and encouraged archaeologists to form many different theories regarding the Mosques’ original state. The Great Mosque of Samarra was, for a time, the largest mosque in the world; its minaret, the Malwiya Tower, is a spiraling cone 52 meters (171 ft) high and 33 meters (108 ft) wide with a spiral ramp. The reign of al-Mutawakkil had a great effect on the city’s appearance, for he seemed to have been a lover of architecture and responsible for building the Great Mosque of Samarra.

In a list of his building projects, which appears in several different versions, the new Congregational Mosque and up to twenty palaces are mentioned, totaling between 258 and 294 million dirhams. With its spiral minaret, the new Congregational Mosque, built between 849 (235 AH) and 851 (235 AH), formed part of the city’s extension to the east, extending into the old hunting park. The mosque itself was destroyed in 1278 (656 AH) after Hulagu Khan invaded Iraq. Only the outer wall and its minaret remain.

History of the Abu Dulaf Mosque

Between 859 and 861, the Abbassid caliph al-Mutawakkil relocated temporarily from his palace at Samarra to a new settlement named Ja’fariya, about eight kilometers to the north on the east bank of the Tigris. The Mosque of Abu Dulaf became the new congregational mosque, serving the Great Mosque in Samarra during this brief two-year period. Abu Dulaf mosque follows almost the same model as the earlier mosque of al-Mutawakkil at Samarra, but the complex’s plan is better preserved.

The Abu Dulaf spiral minaret, 32 meters high, is smaller than the al-Mutawakkil minaret at Samarra but similar in every other way: positioned to the north of the mosque with a spiral ramp rising from a square base adorned with small recesses on each side. The mosque has fired brick rectangular piers and introduces the T-plan with a wider axial nave and a double aisle parallel to the qibla wall for the first time in the east. The portico on the courtyard has a double arcade of rectangular piers, while the prayer hall has sixteen arcades oriented perpendicular to the qibla wall.

The walls of the mosque barely remain, just remnants of the northern façade. Forty semicircular towers support the outer wall of the mosque. The excavation conducted during the 1940s by the Iraqi Department of Antiquities provides evidence of a double riwaq that extended from the mosque’s main walls of the northern façade to accommodate large crowds at Friday prayer. Another discovery: the mosque was connected to the governor’s palace by a door beside the mihrab. The palace, now gone, was constructed exclusively of baked brick.

Minarets of the two Mosques

The minaret’s unique spiral design is said by some to be derived from the Mesopotamian ziggurats’ architecture. Some consider the influence of the Pillar of Gor, built in the Sasanian Empire, more prominent.

The Great Mosque of Samarra Plans 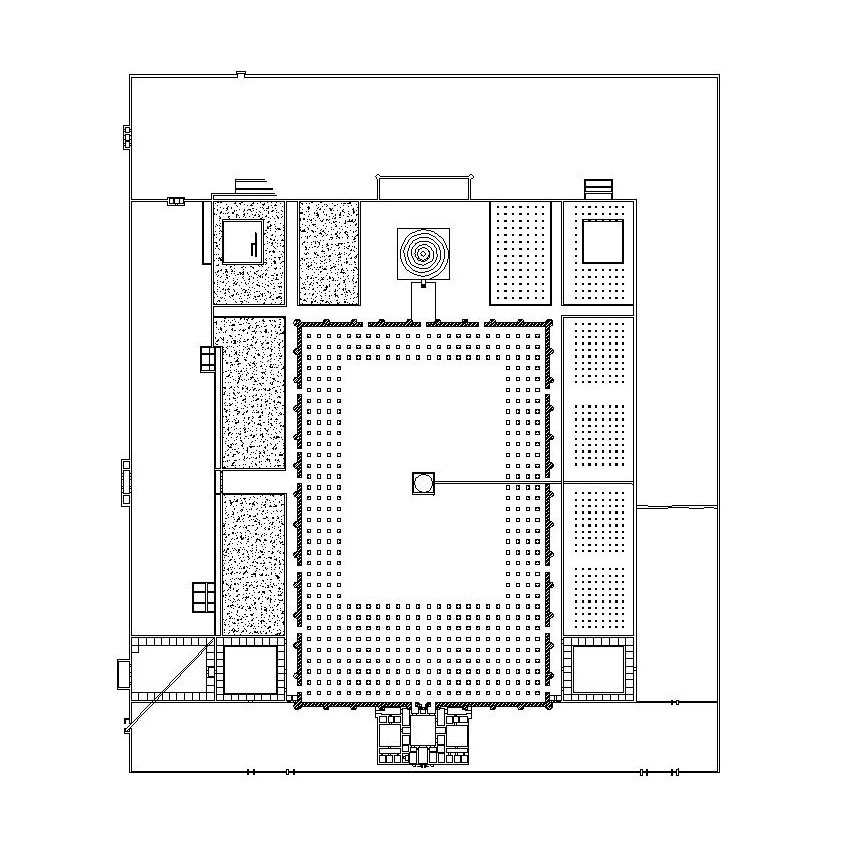 Floor Plan of The Great Mosque of Samarra 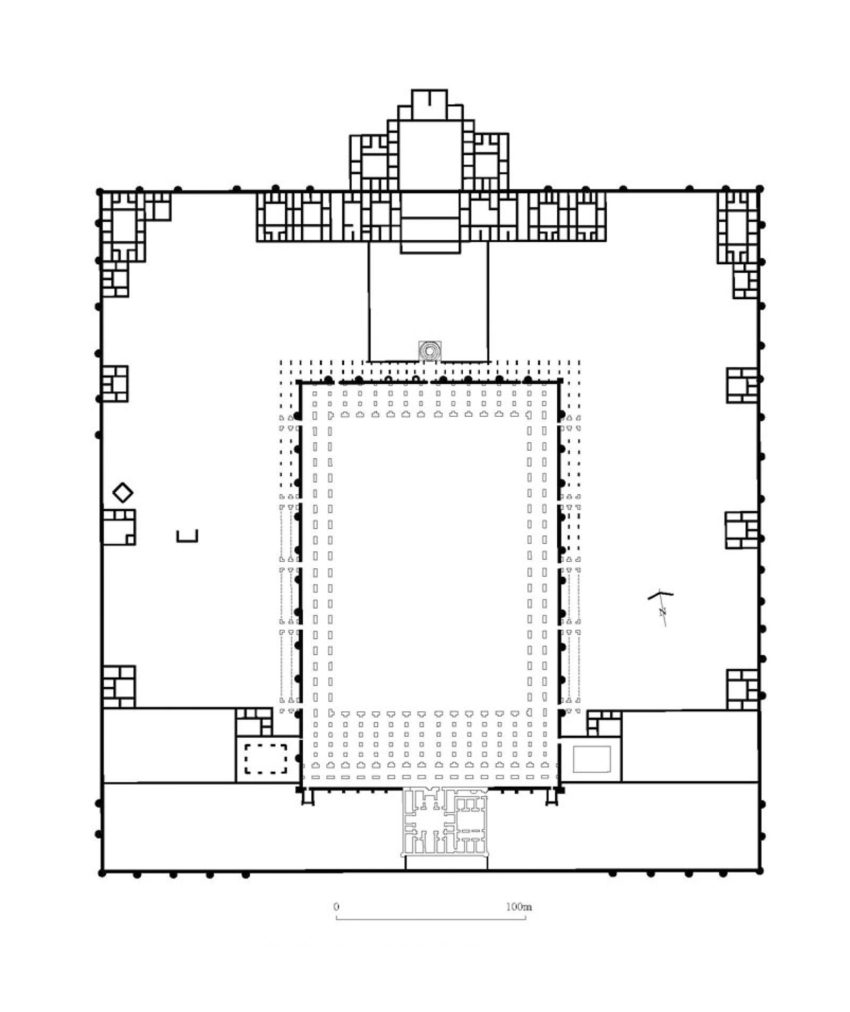 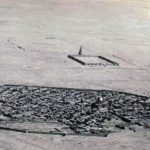 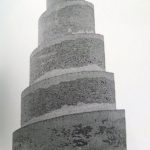 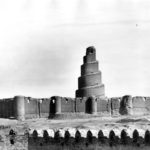 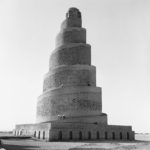 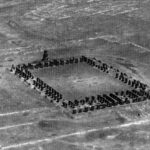 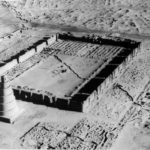 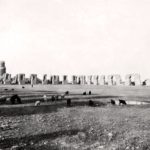 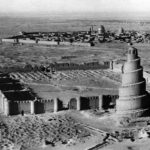 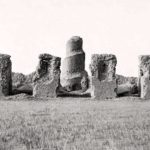 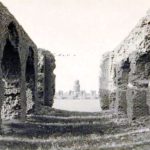 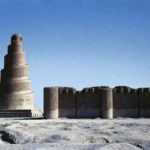 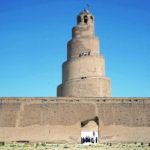 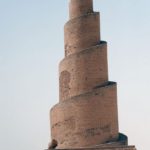 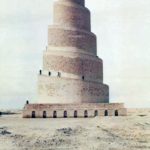 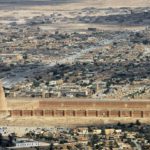 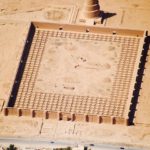 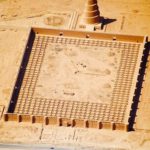 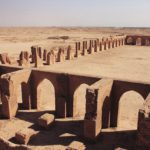 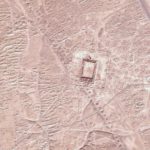 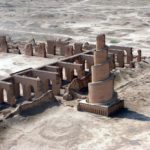 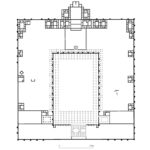 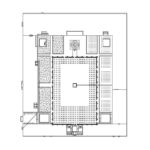 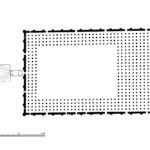 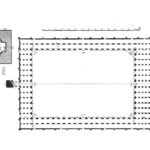 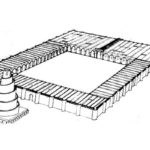