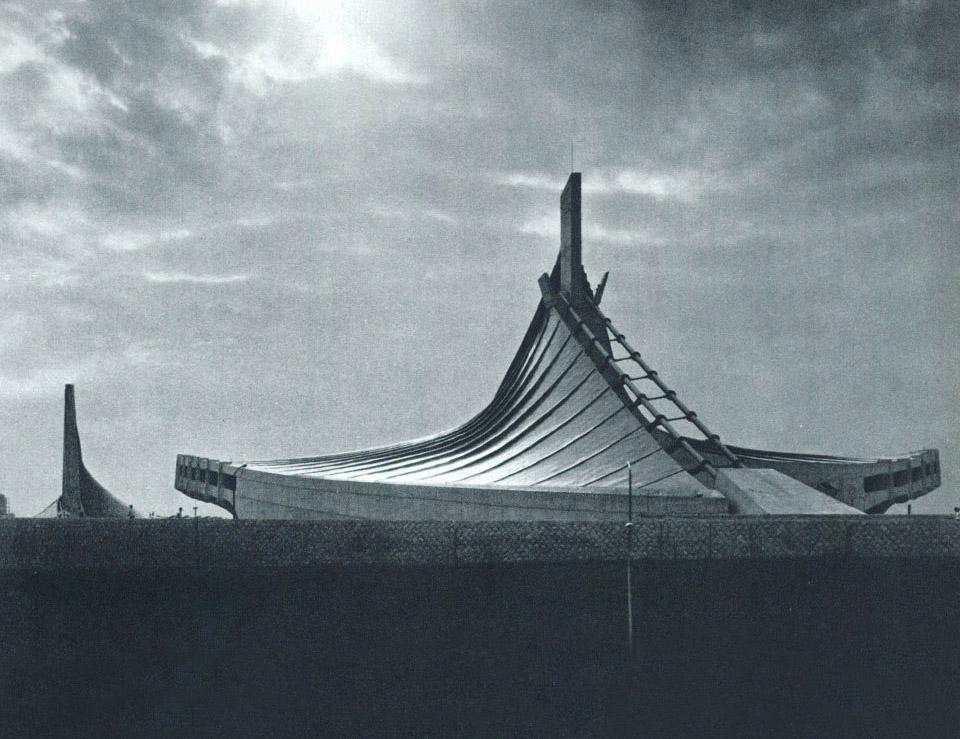 Designed and built between 1961 and 1964 for the Tokyo Olympics, the  National Stadium of Japan, designed by Kenzo Tange, explores and stimulates the creative possibilities of architecture that started at the Yoyogi National Gymnasium. The design was inspired by Frei Otto’s Arena for the Olympic Stadium in Munich and houses swimming pools and diving areas for the 1964 Summer Olympics.

The biggest problem, with respect to the interior space, was guaranteeing that it not take on inhuman proportions when empty or filled with just a few people.We wanted to create and maintain a unified environment where athletes and spectators share growing mutual emotion.

A single space—not closed and oppressive but free and open—a space in which the fifteen thousand spectators can also move and flow ‘gently’ in functional and psychological terms. 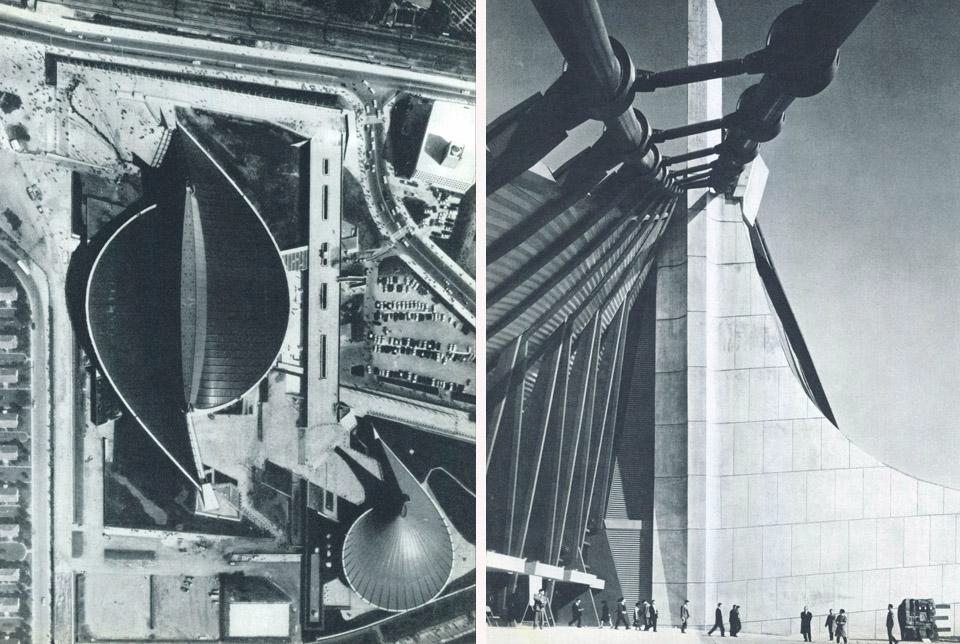 Built for the 1964 Summer Olympic Games in Tokyo, Japan, the Yoyogi National Gymnasium has become an architectural icon for its distinctive design.  The gymnasium hybridizes Western modernist aesthetics and traditional Japanese architecture.

Sitting within one of the largest parks in the metropolitan region of Tokyo, Tange uses the context as a way in which to integrate his building into the landscape.  The subtle curves of the structural cables, the sweeping roof plane, and the curving concrete base seem to emerge from the site appearing as one integrated entity.

The gymnasium is the larger of two arenas for the 1964 Summer Olympic Games, both designed by Tange and employ similar structural principles and aesthetics.

The smaller pavilion, which holds approximately 5,300 people, is used for various small Olympic events. In contrast, the national gymnasium was designed to be occupied by 10,500 people, primarily for the Olympic swimming and diving competitions.  However, it could be transformed into a space to accommodate larger basketball and ice hockey events.

The architect chose a suspension roof structure in which wire ropes suspended the roof, a construction method that had never been seen before in the world. Such unprecedented technology was a challenge. 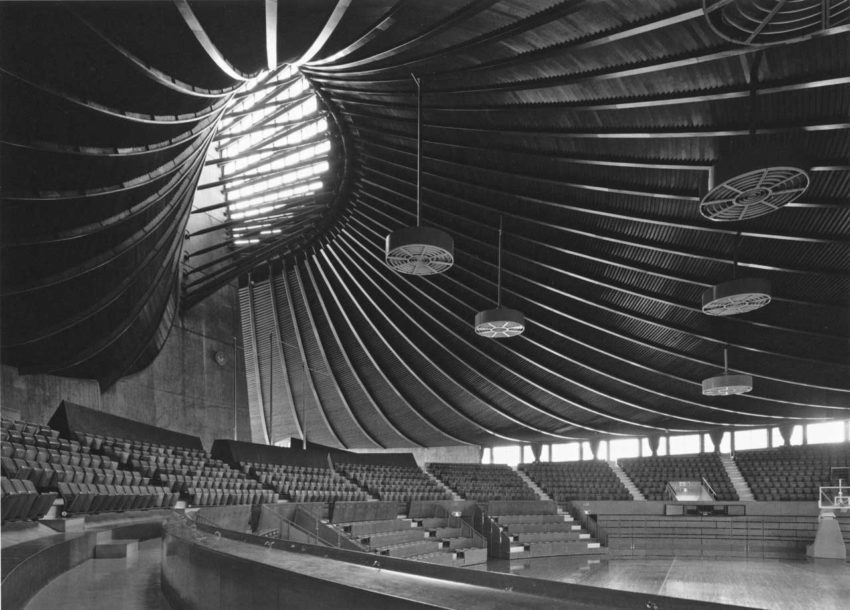 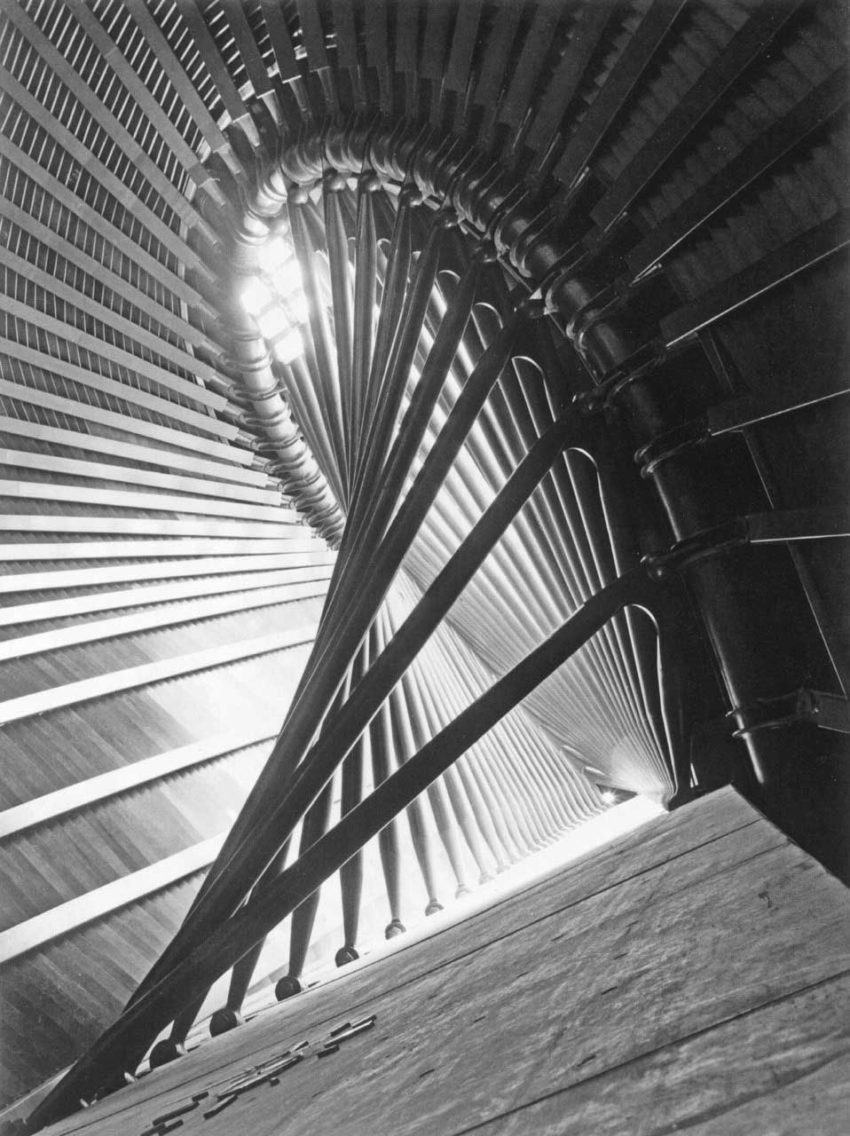 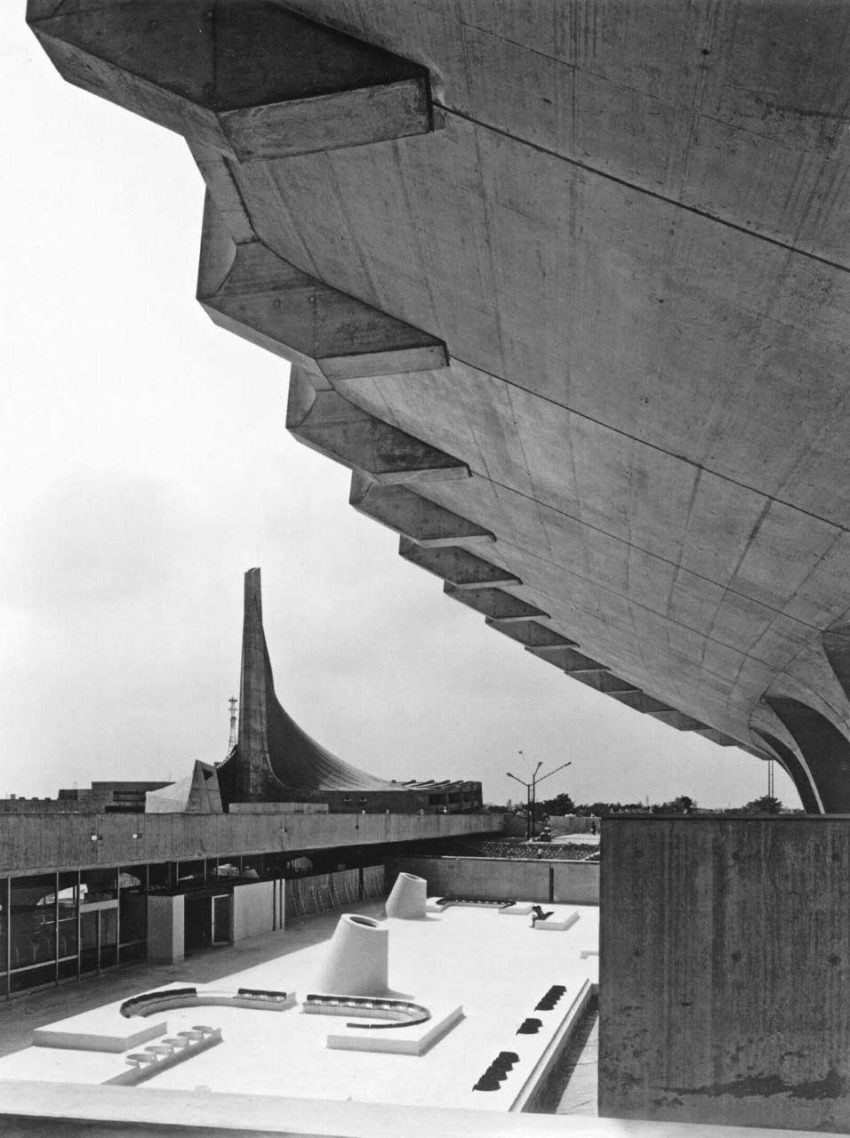 The scale of the Suspension Roof Structure

Two large steel cables are supported between two structural towers and anchored into concrete supports on the ground.  The suspended cables form a tensile tent-like roofing structure; a series of pre-stressed cables are suspended from the two main cables that drape toward the concrete structure that creates the gymnasium base and provides the necessary structure for seating within the stadium.

To build a vast space without even one intervening column, two main cables that were 33 centimeters in diameter and weighed 250 tons were strung between two structural support columns 40 meters in height and 126 meters apart. Wire ropes were stretched in a crosswise fashion down the left and right sides, suspending the massive roof. A suspension roof structure using wire ropes was designed for that unprecedented roof span. The successful bid for the unique, unprecedented structure was chosen only 20 months before the Olympic Games.

Together with a number of other important projects which Kenzo Tange carried out after 1959, the Olympic stadia in Tokyo can be regarded as the culmination of his career, designed in 1960 and built in 1964, on a par with the highest achievements of the Japanese tradition…

The plan [of the larger stadium] is in the form of two semi-circles, slightly displaced in relation to one another, with their unconnecting ends elongated into points. The entrances are located in the concave sides. The roof is supported on two reinforced concrete pillars, and is made up of a system of steel cables onto which enameled steel plates are then soldered. The curving form of the roof serves to make it more resistant to wind, which can reach hurricane force in this region. 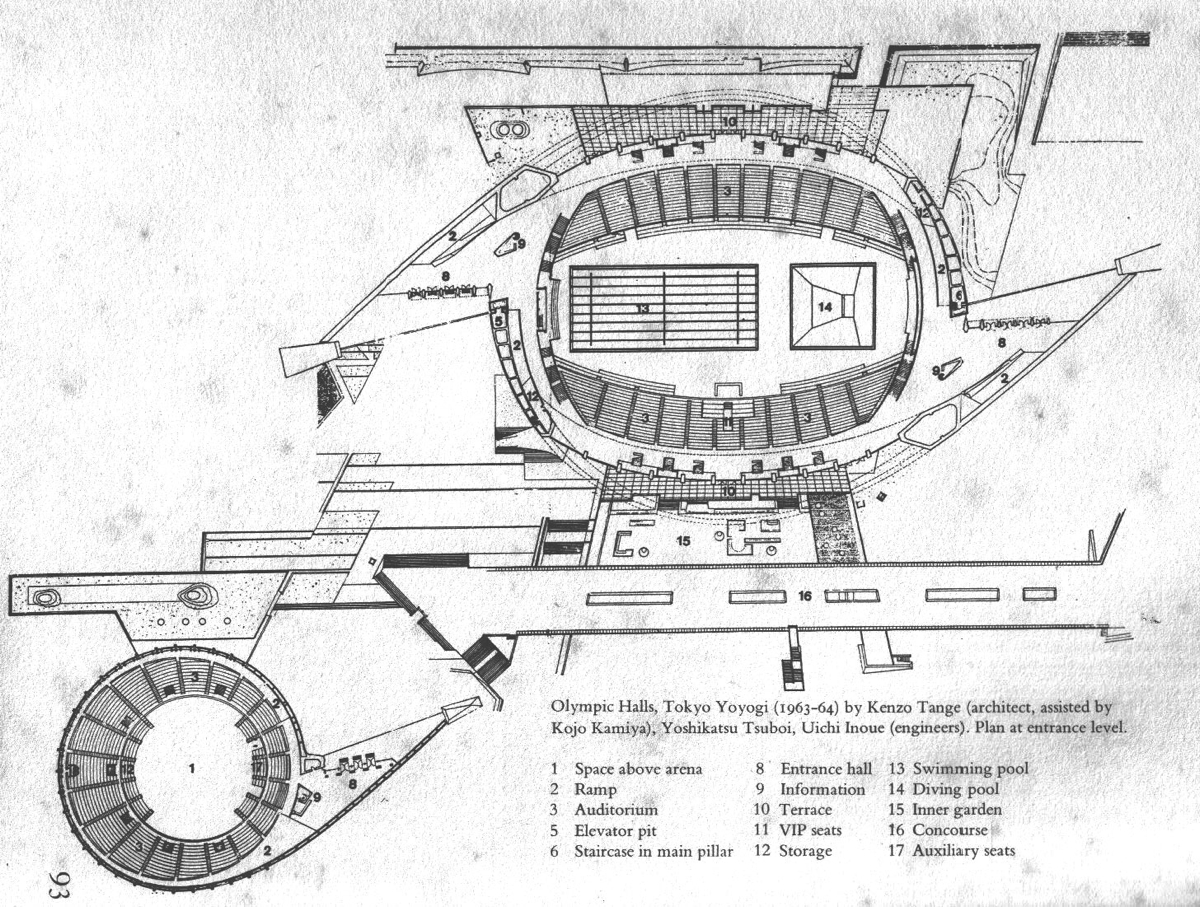 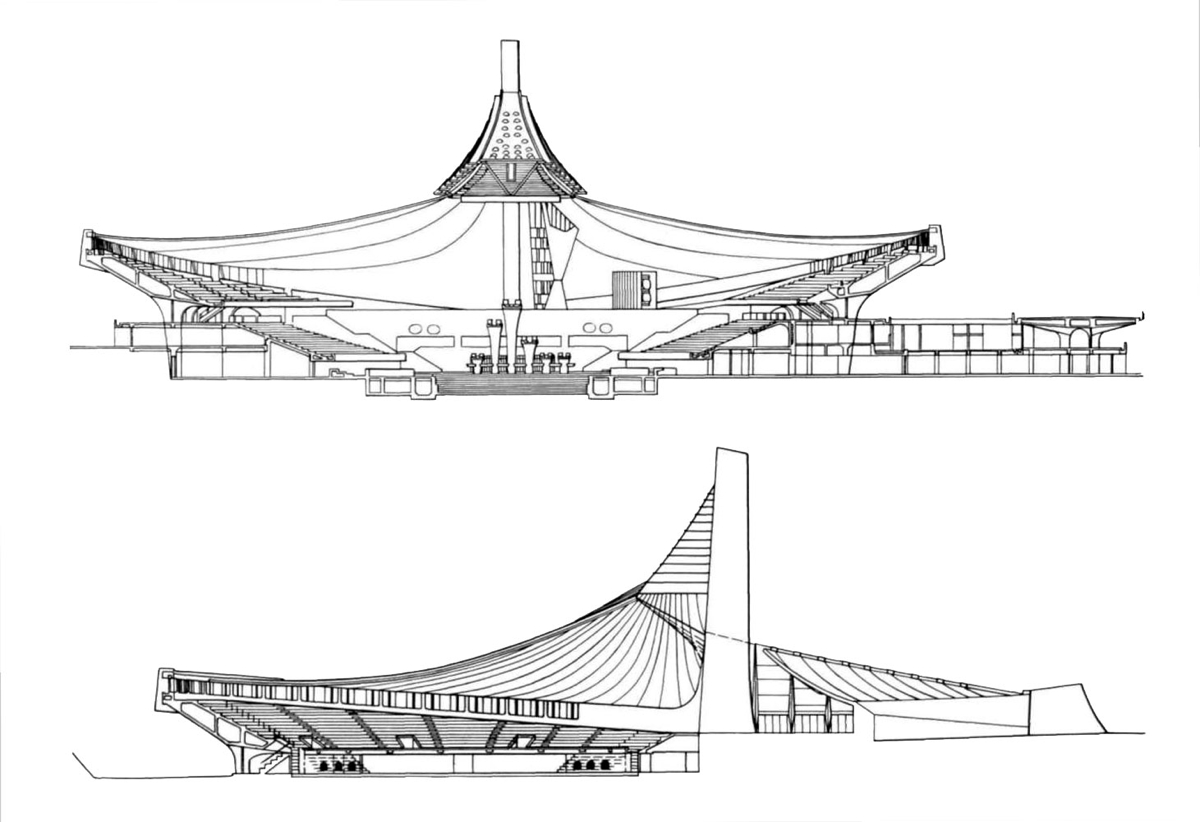 Modern Photographs of the National Gymnasium for Tokyo Olympics 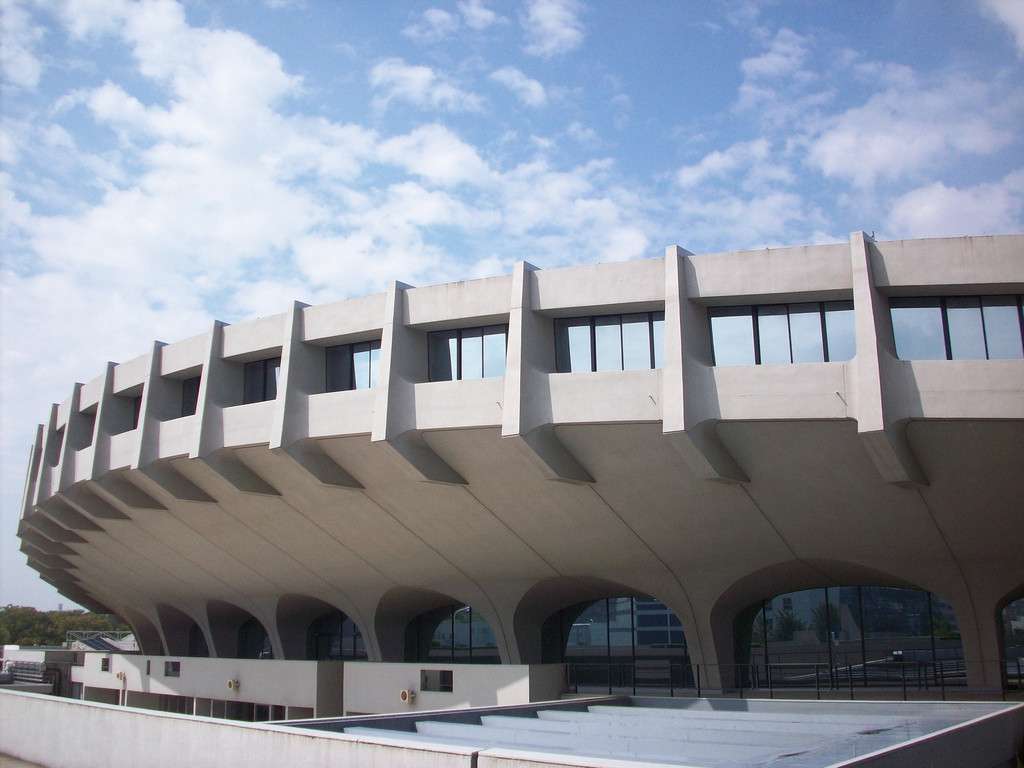 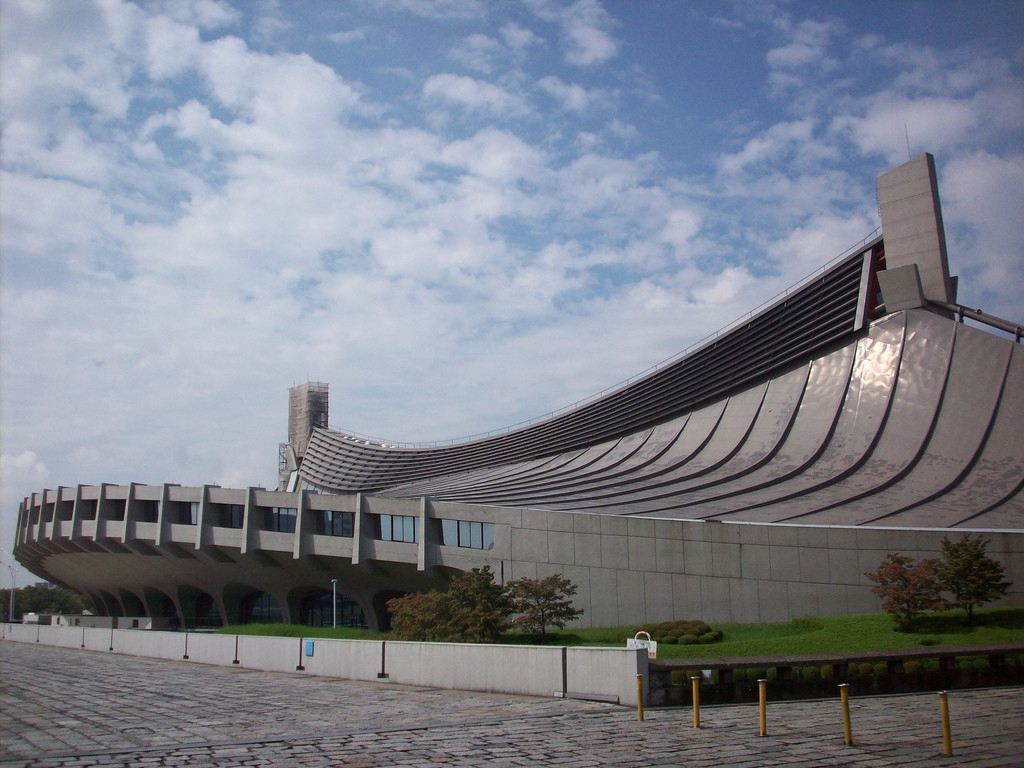 From Tokyo-based French architect and filmmaker Vincent Hecht comes “Classic Japan,” a series of short films focused on Japanese architecture from between the 1950s and 80s.

Kenzō Tange was a Japanese architect and winner of the 1987 Pritzker Prize for architecture. He was one of the most significant architects of the 20th century, combining traditional Japanese styles with modernism, and designed major buildings on five continents. His career spanned the entire second half of the twentieth century, producing numerous distinctive buildings in Tokyo, other Japanese cities, and cities around the world, as well as ambitious physical plans for Tokyo and its environs. Tange was also an influential patron of the Metabolist movement.

Influenced from an early age by the Swiss modernist Le Corbusier, Tange gained international recognition in 1949 when he won the competition for the design of Hiroshima Peace Memorial Park. He was a member of CIAM (Congres Internationaux d’Architecture Moderne) in the 1950s. He did not join the group of younger CIAM architects known as Team X, though his 1960 Tokyo Bay plan was influential for Team 10 in the 1960s and the group that became Metabolism.