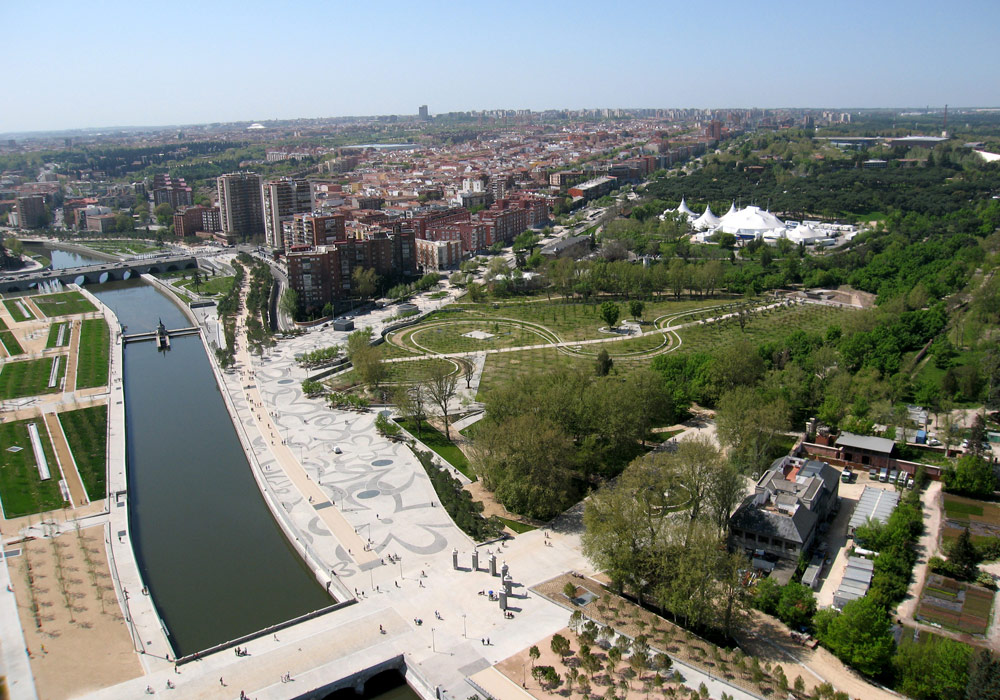 The City of Madrid reclaimed the banks of the Manzanares River by depressing a large segment of the inner ring road, the M-30, built in the 1970s and severing whole sections of the city from each other. The result of surfacing nearly 30 kilometers of tunnels is the creation of 120 hectares of new public space, which encompasses dozens of sports areas (tennis and basketball courts, soccer fields, fitness areas, rock climbing center, skate park), greenswards, plazas, cafes and restaurants, an orchard, an urban beach, children’s play areas, plus 30 kilometers of cycling paths, and 11 new footbridges.

The design is based on the idea »3 + 30« – a concept which proposes dividing the 80 hectare urban development into a trilogy of initial strategic projects that establish a basic structure which then serves as a solid foundation for a number of further projects, initiated in part by the municipality as well as by private investors and residents. 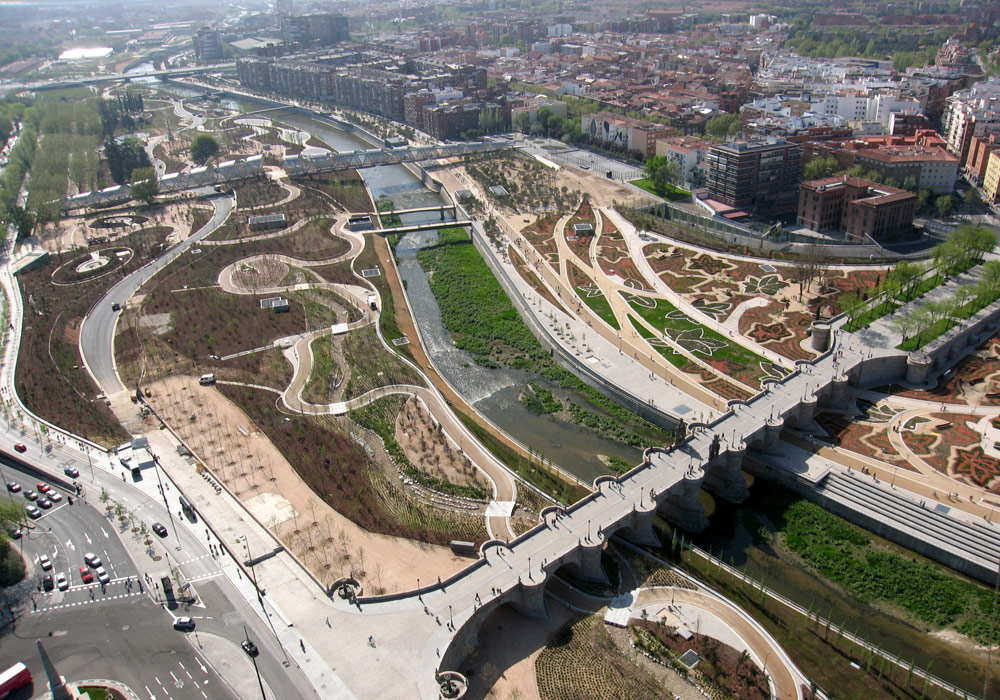 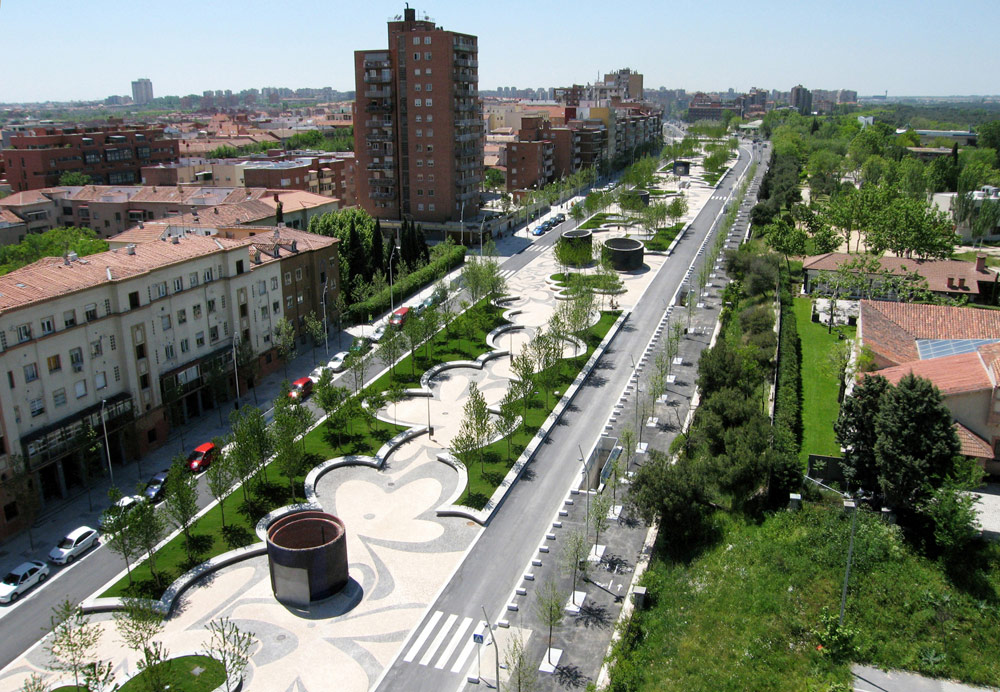 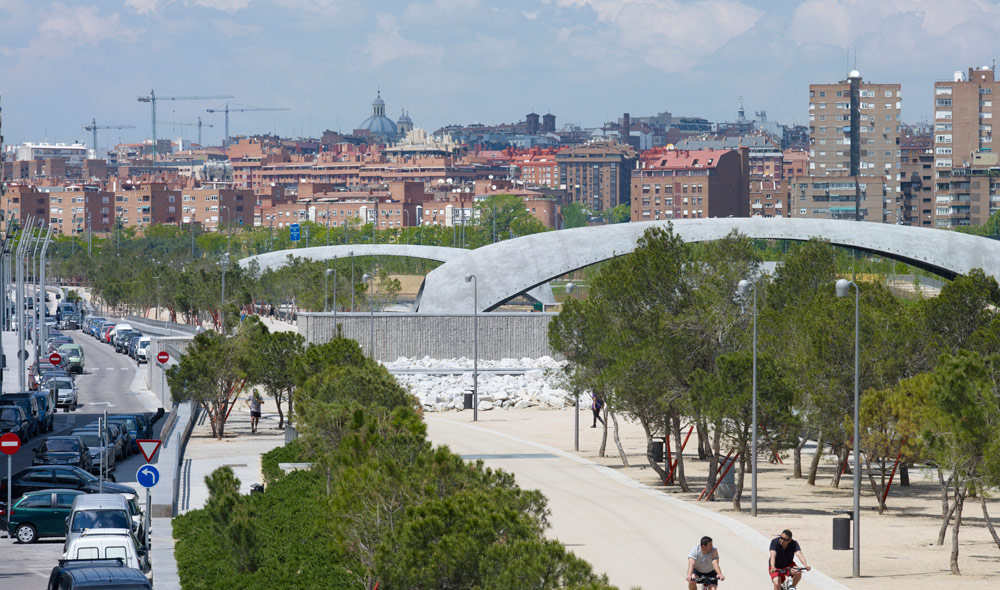 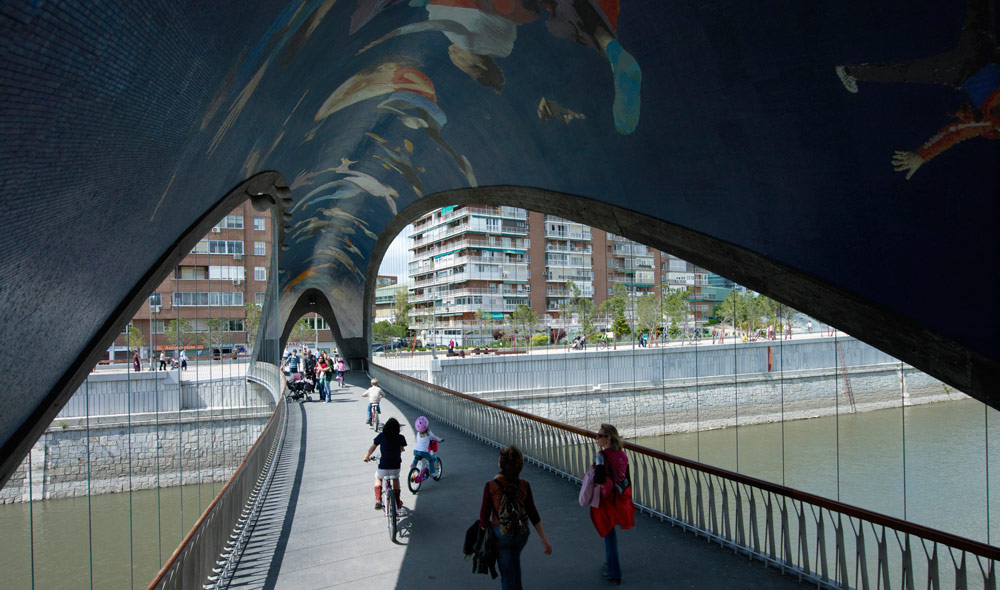 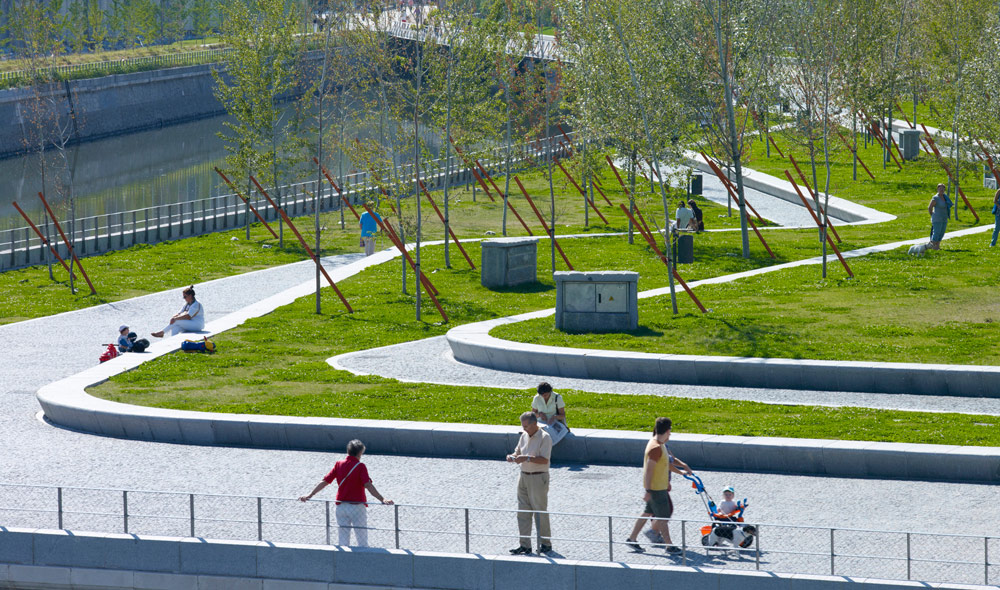 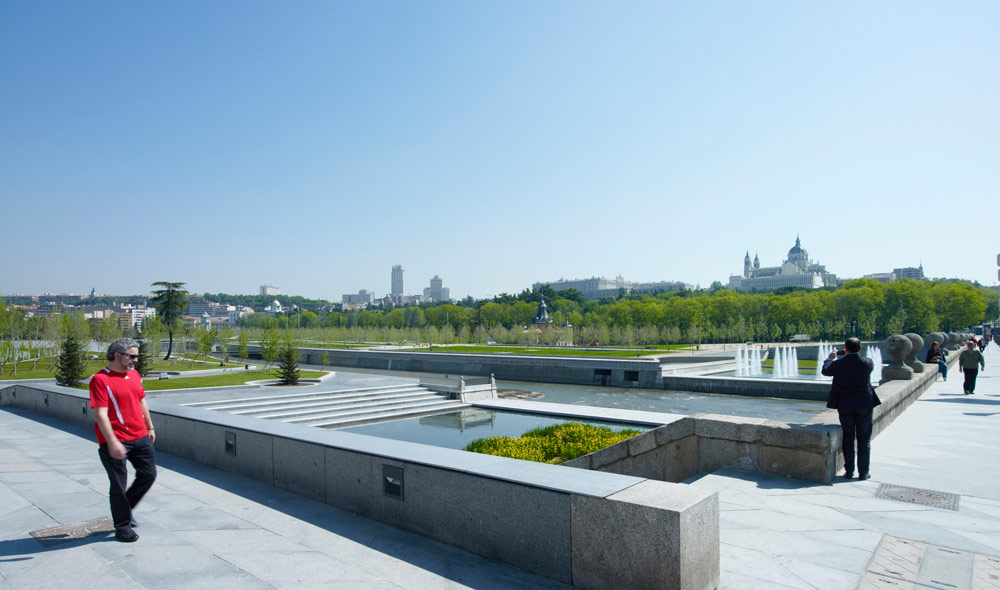 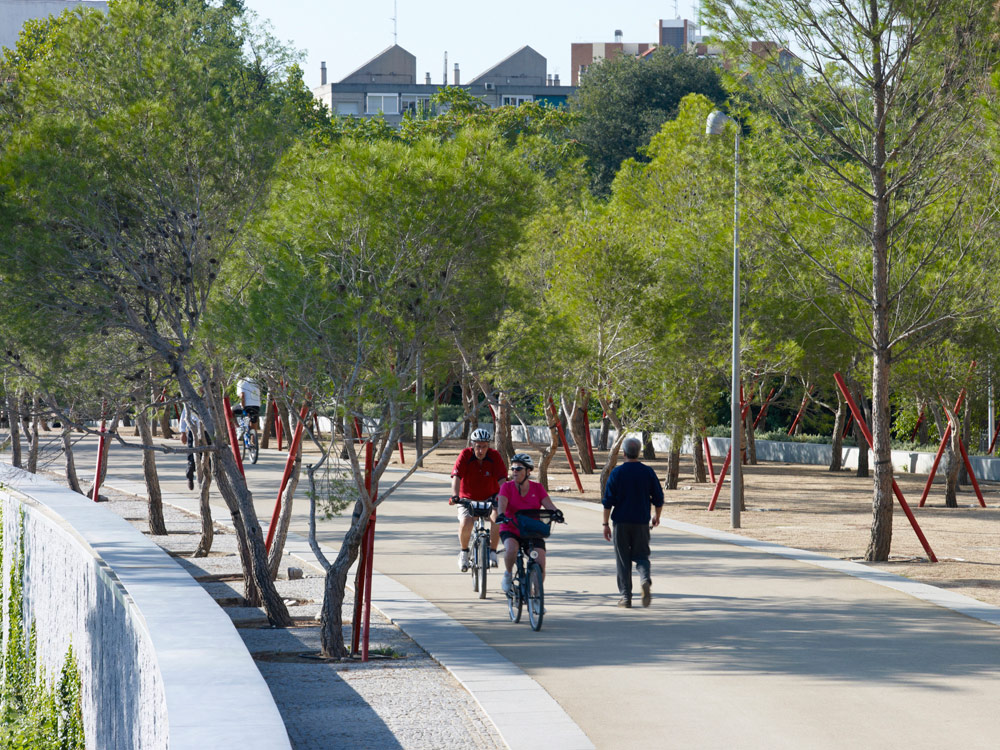 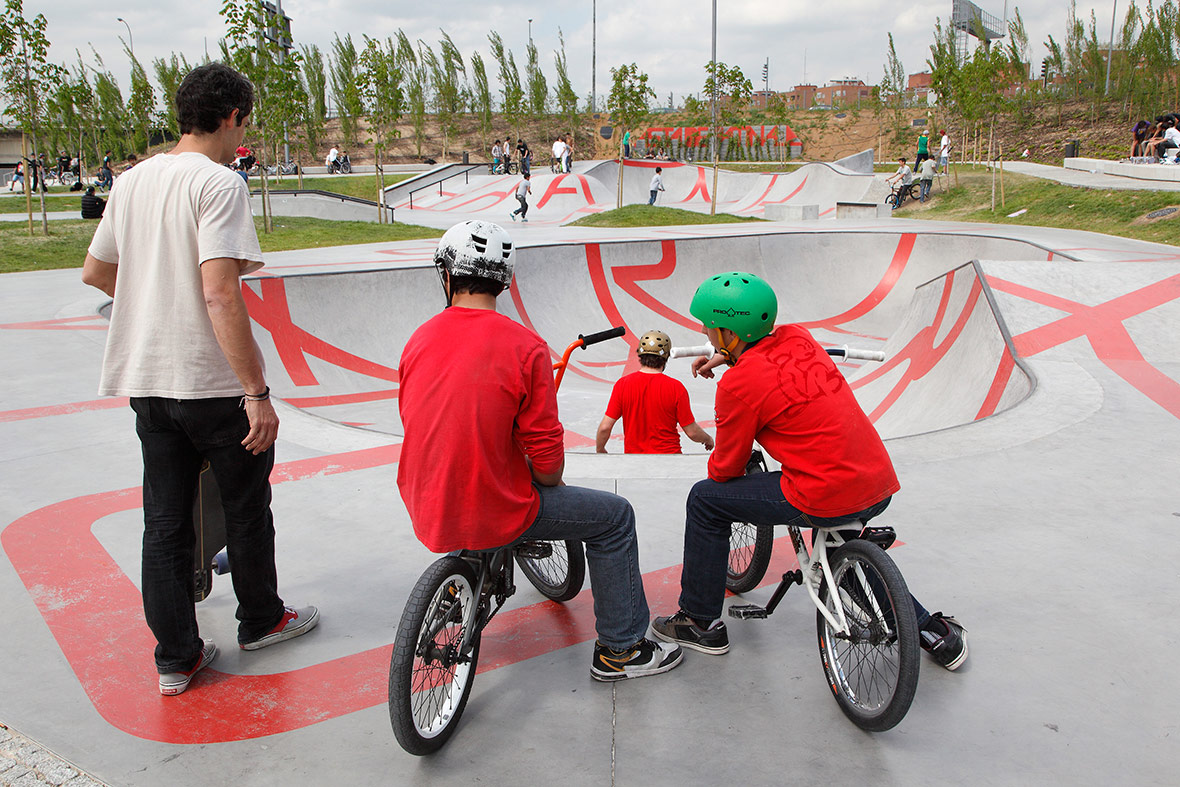 West 8, together with three renowned architects from Madrid (Burgos & Garrido, Porras La Casta, Rubio & A-Sala), united under the name MRIO Arquitectos designed the winning master plan for Madrid RIO invited international competition in 2005. The team’s proposal reclaimed area above the tunnel and was the only submission to resolve the urban situation exclusively by means of landscape architecture. The design is based on the idea »3 + 30« – a concept which proposes dividing the 80-hectare urban development into a trilogy of initial strategic projects that establish a basic structure which then serves as a solid foundation for a number of further projects initiated in part by the municipality as well as by private investors and residents.

A total of 47 subprojects with a combined total budget of 410 million Euros have since been developed, the most important of which include: the Salón de Pinos, Avenida de Portugal, Huerta de la Partida, Jardines de Puente de Segovia, Jardines de Puente de Toledo, Jardines de la Virgen del Puerto and the Parque de la Arganzuela. In addition to the various squares, boulevards, and parks, a family of bridges were realized that improve connections between the urban districts along the river.  The construction was phased so that the public could enjoy the park from 2011 and was fully completed in 2015.

The Salon de Pinos is designed as a linear green space, which will link the existing and newly designed urban spaces with each other along the Manzanares River. Located almost entirely on top of the motorway tunnel, the flora references the mountain landscape on the outskirts of Madrid. The pine tree which is able to survive on the barren rock is planted in excess of 8,000. The “choreography” of tree planting with a repertoire of cuts, selection uniquely shaped trees, combined with inclined planting lends a natural and sculptural character to the space, creating a botanical monument. The complex nature of this urban park necessitated a variety of tests, careful selection of plants and materials, custom design of a tree support which references Madrid’s infamous bull horns and a range of technical solutions to achieve the ideal structure of the substrates in and above the tunnel.

The Avenida is one of the most important roads into the center of Madrid and is characterized by its impressive environs. The motorway lies at the boundary between one of the most densely-built residential quarters and the Casa de Campo – the hunting grounds of the former Spanish kings – and from afar offers an impressive view to the historic city center on the banks of the Manzanares. By relocating the road in a tunnel and providing underground parking for 1,000 vehicles, it was possible to convert the space into a garden, which was of particular benefit for local residents.

The design takes a journey to Portugal as its theme – the extension of the Avenida de Portugal would lead directly to Lisbon, crossing a valley famous for its cherry blossoms in the otherwise extremely barren and inhospitable climate of the Estremadura. The abstraction of the cherry blossom becomes a design element of the park, a selection of cherry trees are planted to extend the flowering period and,traditional Portuguese paving is reinterpreted and connects the space to its surroundings, the result is the creation of an extremely popular public space.

The City Palace was built as a Baroque ensemble with a strict composition that connected the Royal Palace with the hunting grounds and the fruit and vegetable garden on the other side of the river. Due to the infrastructural changes of the fifties, the orchard was turned into a transportation hub. Contrary to the initial tendency to create a historical reconstruction, the Huerta is now a modern interpretation of the orchard. A wide selection of fruit trees planted in groups to create an enclosed garden. Fig trees, almond trees, pomegranate and more symbolize the ancient paradise gardens.

The river, which has been channeled underground in recent decades, now meanders through the landscape. Its mouth and source are distinctively shaped. From the cave, which forms the end point of the watercourse, a new vista gives the viewer view of the restored watercourse –combing elements of the Baroque city castle. As a consequence of the design, there is now a new entrance to the Casa de Campo that logically connects to the public space.

The dominant motive for the biggest area of the project is water. The canalized river Manzanares is surrounded by architectonical walls. The park is based on a number of different emotions and landscapes, which in context of the water makes become tangible and explorative. The system of streams running through the park will cross through the topography and merge into the different spaces and motifs. Each of the different streams have their own character. The ‘Rio seco’ for example is an interpretation of the dry rivers of the Spanish landscape, here you feel the presence of the water in any season but only the freshness of the vegetation along the riverbed and pebbles on the riverbed are visible throughout the year. Botanical variety will create different atmospheres in the seasons and will allow a clear structuring of the spaces.

In contrast to the technical and pragmatic nature of typical pedestrian infrastructural bridges, the Puentes Cascara creates a place where the river is really experienced. Designed as a massive concrete dome with a rough texture, the bridges have the scale of park elements rather than infrastructural elements. More than one hundred cables resembling whale baleens are fixed to the slim steel deck. The fine detailing becomes visible when entering the bridge. The ceilings are covered in a beautiful mosaic artwork done by Spanish artist Daniel Canogar. Lighting elements situated in the edges the ceiling illuminates the artwork and the deck by reflection, bringing it to life at night.

The project also prompted the restoration of five historic dams and two historic bridges (the Puente de Segovia and Puente de Toledo), as well as the refurbishment of highway bridges and the recuperation of the areas surrounding these infrastructural works. With these new river crossings and the incorporation of existing historic features into the new park plan, Madrid Río has strengthened surrounding neighborhoods’ connection to the new amenities and to each other. 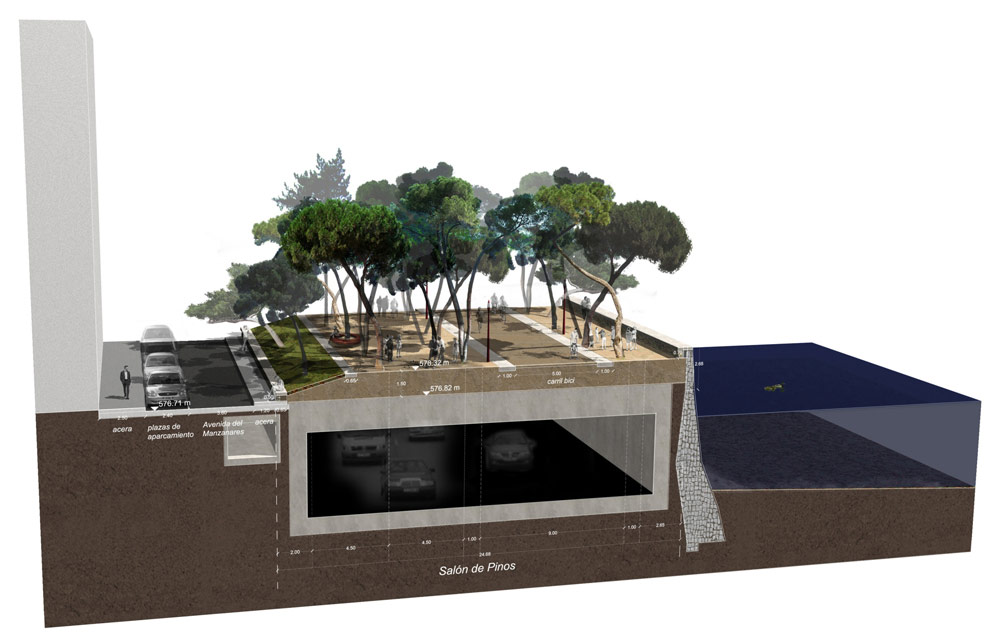 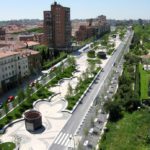 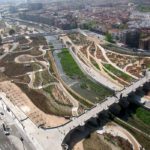 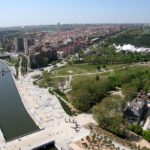 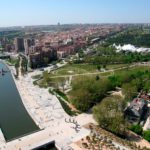 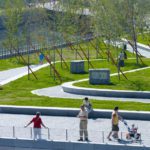 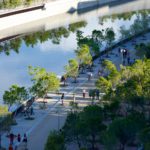 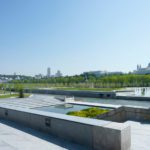 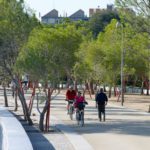 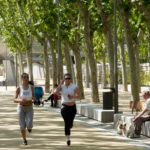 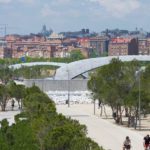 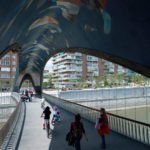 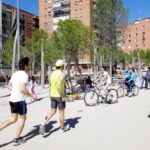 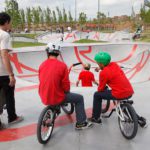 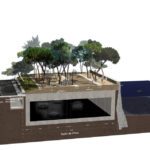 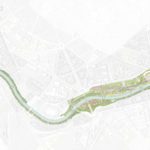