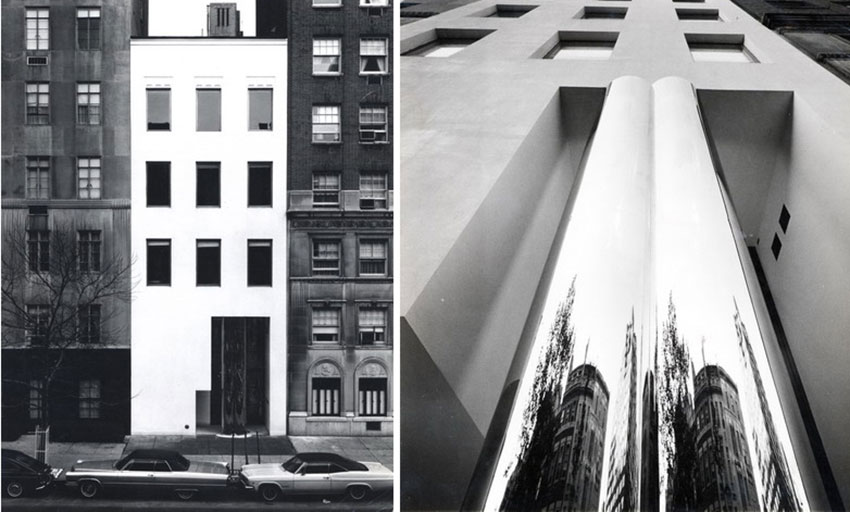 In 1969, Richard Feigen commissioned the Austrian architect Hans Hollein to redesign an 1887 row house and convert it into a two-story gallery and residence for his own use. The gallery has changing floor levels and ceiling heights and a balcony overlooking the ground floor. The sinuous staircase rail linking the gallery spaces has an ocean liner quality. This nautical theme is carried over in the stainless steel capsule bathroom, hidden behind a hatch. The finely crafted materials and elegant fixtures contrast effectively with brightly painted steel air-conditioning pipes.

Architects have to stop thinking in terms of buildings only. Built and physical architecture, freed from the technological limitations of the past, will more intensely work with spatial qualities as well as the psychological ones. The process of erection will get a new meaning, spaces will more consciously have haptic, optic and acoustic properties. 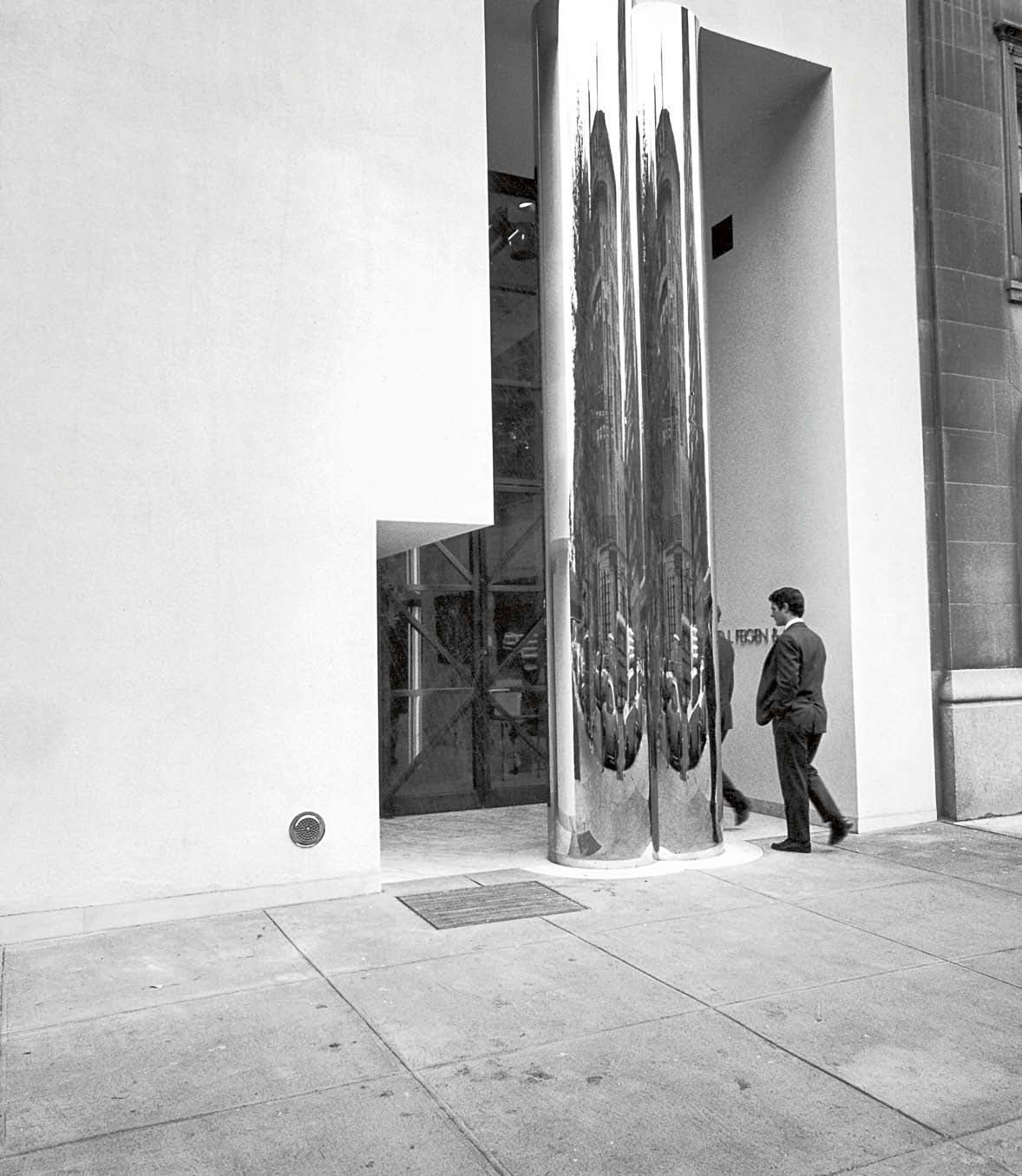 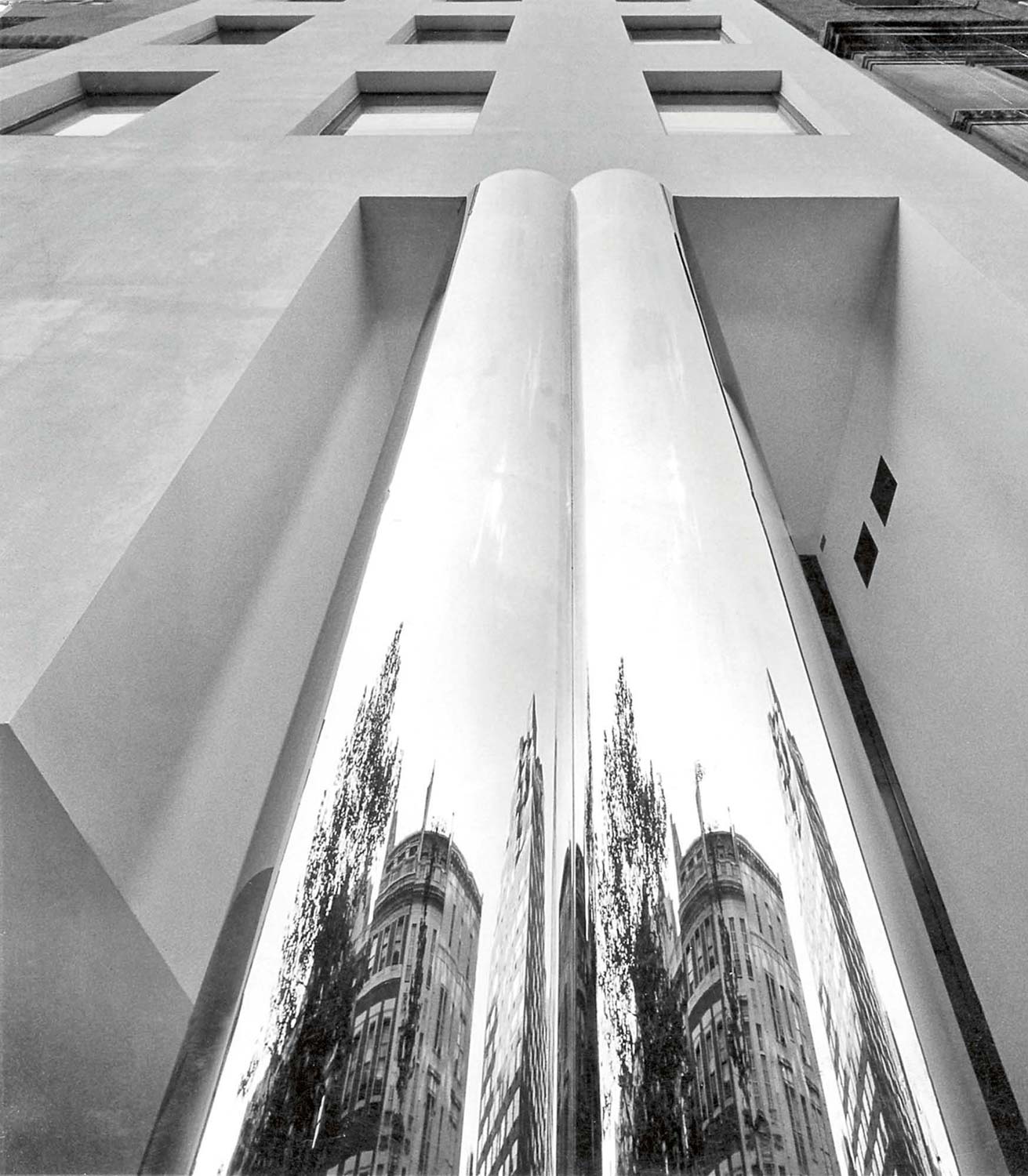 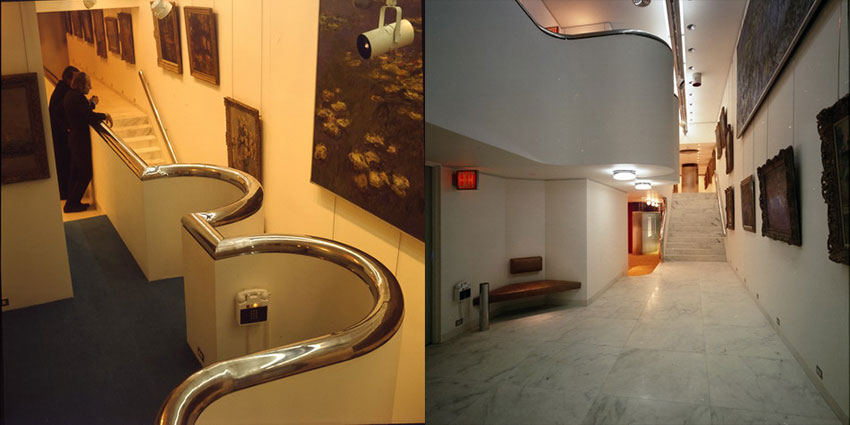 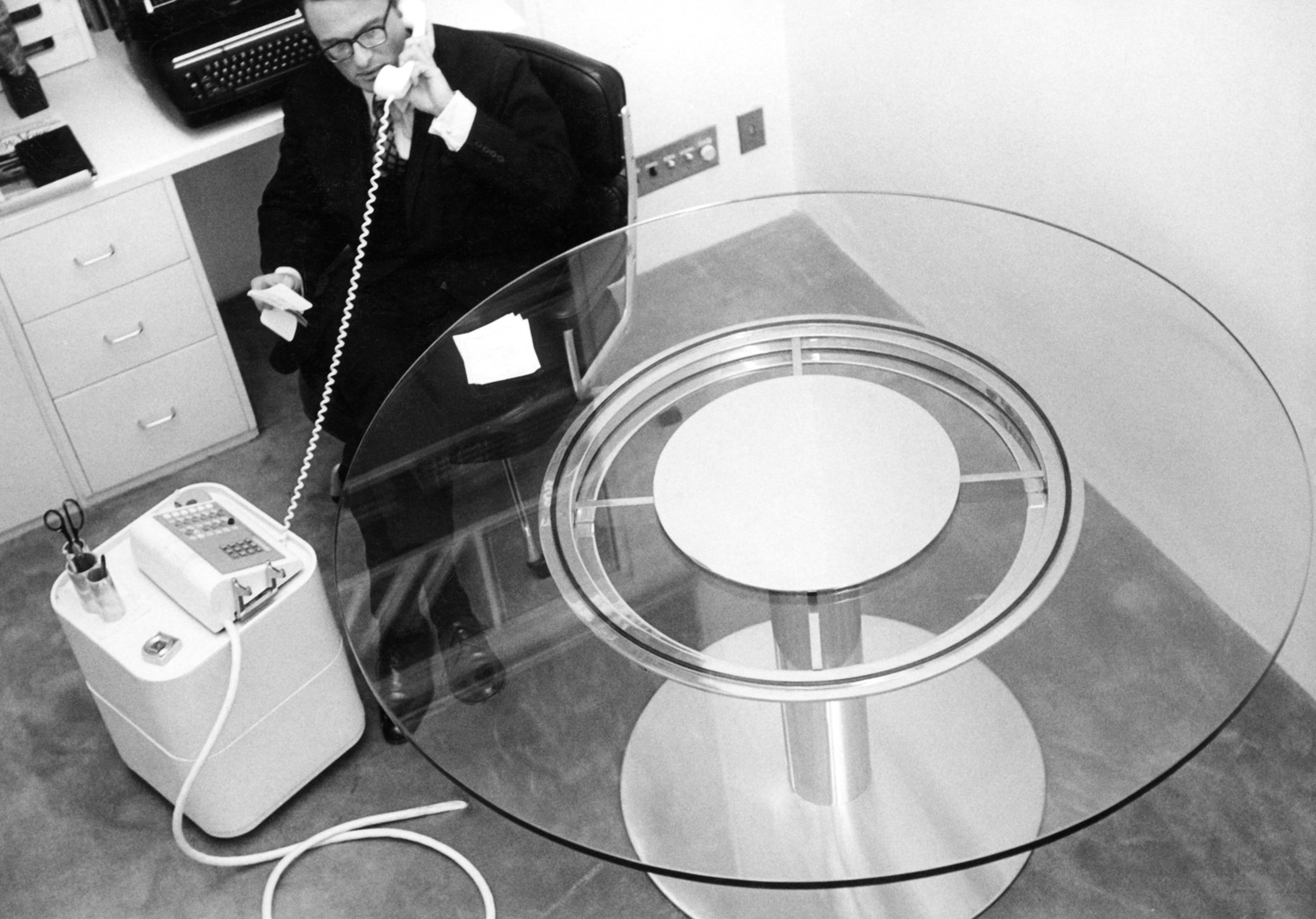 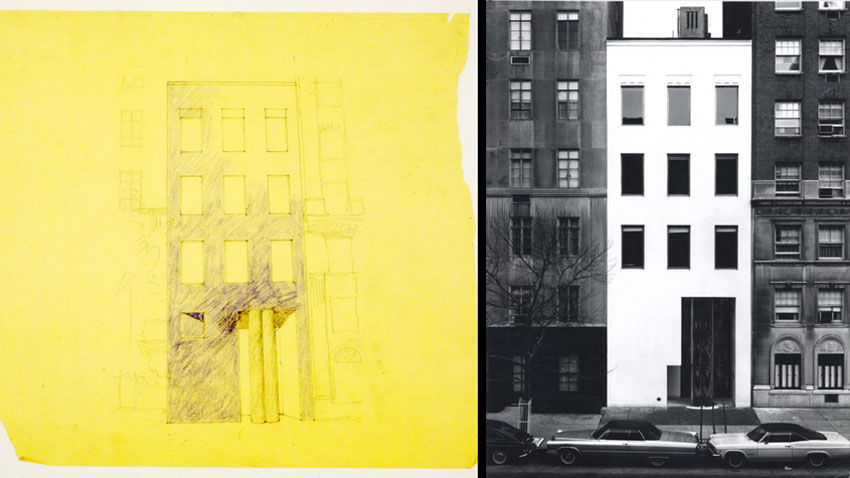 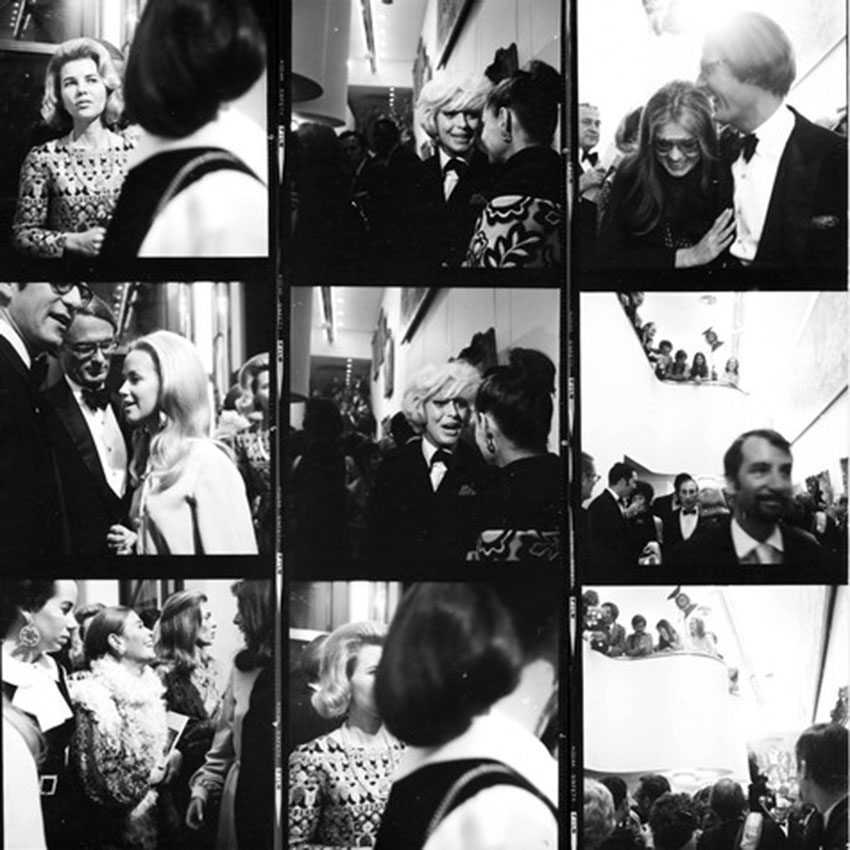 Extracts of the Article HANS HOLLEIN: The Showroom Master by Robert Wiesenberger.

“Three years after the Retti shop, the eminent gallerist Richard L. Feigen asked Hollein to design an Upper East Side New York location for his gallery. Feigen had been assembling an exhibition of “visionary architecture” for his downtown gallery, with works by Buckminster Fuller, Frei Otto, Claes Oldenburg, and others. […]

“Passing through a grid of windows into the double-height main gallery, visitors could follow the sinuous line of a polished Art Deco handrail up a flight of stairs to the second floor, and around to a double-curved viewing balcony – evocative of a theater box, an ocean liner, a pair of breasts. This offered a view onto the salon-style hanging across the way, and more importantly, the society spectacle of a gallery opening below. Alternatively, following the sale’s choreography, one could pass to the rear of the ground floor, through two smaller galleries, and into a back room – as long and nearly as wide as the main gallery. […]

Yet Hollein’s gallery was better at displaying itself than its art. “Nothing really worked well in that space,” Feigen recalls. His contemporary artists refused to show there, and many left the gallery. And his collection of old masters was even more overpowered by the architecture.”

The gallery forced Kenneth Frampton, in his review, to “question how neutral or specific an art gallery should be and whether it should in itself constitute an object of aesthetic intensity.” Given the pluralist forms and demands of contemporary art (as opposed to, say, candles), he answered the latter question in the negative.

Hans Hollein (1934 – 2014) was an Austrian architect and designer and key figure of postmodern architecture. Some of his most notable works are the Haas House and the Albertina extension in the inner city of Vienna.

He has been described as far more than an architect—artist, teacher, author, and designer of furniture and silverware. He graduated from the Academy of Fine Arts, School of Architecture, in Vienna in 1956. He was awarded a Harkness Fellowship, which allowed him to travel in the United States. He undertook graduate work at the Illinois Institute of Technology in Chicago and completed his Master of Architecture degree at the University of California, Berkeley, in 1960. During those same years, he was able to meet and study with some of the architects he most admired, including Mies van der Rohe, Frank Lloyd Wright, and Richard Neutra.